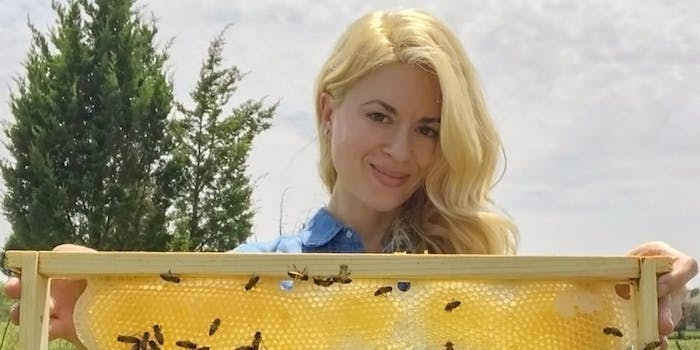 She called out the media for 'perpetuating a false narrative.'

Last week, accusations of bad beekeeping were leveled against Texas Beeworks’ Erika Thompson, who runs a very popular TikTok account. She responded to the “untrue and hurtful attacks” on Instagram this weekend.

“It’s a sad day when people see a woman doing something that’s so outside of the norm, they assume there’s no way she can actually be doing those things, and if she is, she must be getting help from a man,” Thompson wrote. She’s referring to a claim from TikToker lahoneybeerescue, who accused Thompson of getting help from her husband before shoots.

Thompson also blamed journalists who “chose to support and reward this online harassment by perpetuating a false narrative without taking time to check the facts.”

Thompson often addresses questions from followers about how she doesn’t get stung while handling bees, or why she doesn’t always wear protective gear. But she didn’t directly address the accusations about her technique in the post, or the claim that she stages her videos.

Thompson’s TikToks being posted on Twitter no doubt opened up her work to those who aren’t as versed in beekeeping. There was an additional accusation that she is a Trump supporter going around, which is baseless.

Slate spoke to two beekeepers who addressed the criticisms against Thompson, like wearing dark clothing: “Bees tend to dislike dark colors more than light colors. But I wear blue jeans most of the time,” said Michael Bush. And what about Thompson keeping a queen in her pocket? “Pretty often, I have a whole pocket full of queens,” said Bush.

“As a professional beekeeper,” Thompson wrote, “it’s my mission and my purpose to help people understand and appreciate the work of bees and beekeepers, and I’d really like to get back to doing that now.”

The Daily Dot has reached out to Thompson. We’ll update this story if we hear back from her.