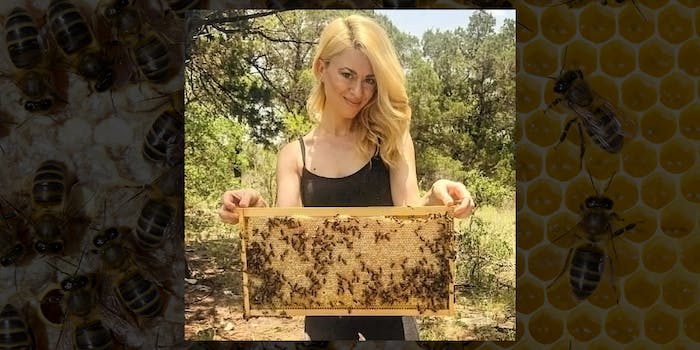 ‘She looks really pretty doing it, and that’s because it’s faked’: TikTok beekeeper called out for allegedly staging her videos

What’s going on with beekeeper TikTok?

This week, accusations against one of TikTok’s most popular beekeepers, Erika Thompson of Texas Beeworks, reached a fevered pitch online after a beekeeper from California claimed she’s faking her videos. Essentially: “The bee removal experts are fightinggggg,” tweeted @CandyCornball.

This seemed to start back on May 24, when Twitter user diligenda posted a clip from the beekeeper, who runs the TikTok account lahoneybeerescue. She calls Thompson out for not wearing protective equipment or tying her hair back in her videos, and for wearing dark clothing, which can aggravate bees—that’s the reason beekeeper suits are white. It’s also suggested that Thompson’s husband, Andrew Hollister, does a lot of the work for her before filming starts.

“She looks really pretty doing it, and that’s because it’s faked,” lahoneybeerescue concludes.

The Elgin,Texas-based Thompson has more than 6 million followers on TikTok, and her videos routinely get millions of views. A glowing profile in the Washington Post back in March expanded her audience even more—a TikTok from around that time has more than 84 million views.

There are obvious reasons people like her: Thompson’s calming, ASMR-esque voiceovers are easy to follow, and her bare-handed scooping technique is engaging—though not exactly uncommon for beekeepers, depending on experience. Also, bee behavior is complex, and TikTok makes it easy to consume.

There’s also the fact that Thompson is an attractive woman—blonde hair always perfectly styled, makeup done. She doesn’t look like a traditional beekeeper, and in a Texas Monthly profile from last fall, she said that “seeing someone handle creatures that you normally don’t see people that hands-on with” likely helped with her reach.

That also means people who aren’t trained beekeepers might try to interact with bees the way she does, which could be dangerous or even fatal. While many of her videos are educational, the nature of TikTok can often zap them of context. In a more recent TikTok, Thompson remarks on how she woke up one morning with more bees on her truck “than usual,” which was turned into a series of duets of people reacting to that statement, but leaving out the part where she talks about why the hive was swarming.

Thompson has not commented on any of this drama yet. In a more recent TikTok, lahoneybeerescue comments on how far the original video went, and explains it was intended for their “900 followers” and people who know them personally. They gained 21,000 followers, “most of whom were coming for my throat.”

Earlier this week, another one of Thompson’s TikToks was posted to Twitter, showing her removing a swarm from an umbrella in what appears to be an apartment courtyard. The fact that Thompson couldn’t find the queen but ”luckily” had an extra in her shirt pocket sent Twitter over the edge. One of the accusations against Thompson is that she stages her videos, but TikTok is made for quick consumption, and removals can take hours. Like many influencers, she’s editing for the platform.

In the same tweet thread from May 24 is a claim Thompson is a Trump supporter. There’s no social media evidence to corroborate that, but that apparently made people unfollow Thompson.

Beekeeper TikTok, or BeeTok, isn’t typically such a source of drama. It’s more of a meditative, educational space, but people were drawn into the beef, perhaps because it’s so niche.

But the beef shouldn’t overshadow the bees, which are essential to pollination and whose numbers are steadily in decline. In a TikTok from May 3, entomologist Abigail Lehner said she’s been tagged in so many Texas Beeworks posts that she decided to offer her thoughts.

Lehner doesn’t mention issues with Thompson’s technique, but points out Texas Beeworks doesn’t mention working with native bees to protect their populations, only honeybees, which are not native, though both are needed to thrive.

We reached out to Thompson and lahoneybeerescue for comment.