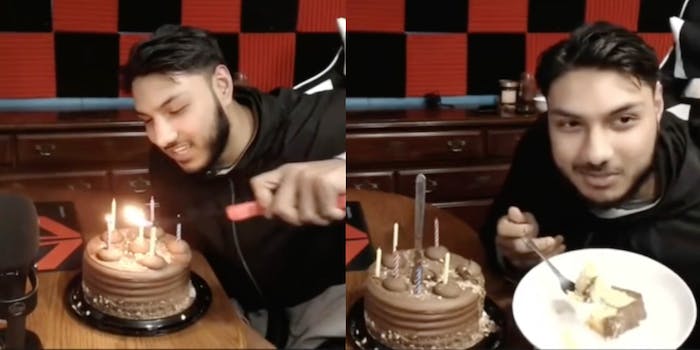 'One of the most kind-hearted people I've ever seen on Twitch or TikTok.'

A streamer is being celebrated online after helping a lonely fan celebrate his birthday in a video shared to TikTok.

Uploaded earlier this month by EPICmoh, an up-and-coming content creator known for gaming on Twitch, the footage begins with a viewer named Andy revealing that it is actually his birthday.

When EPICmoh asks how he will be celebrating, Andy reveals that his 13th birthday will be spent alone at home as both of his parents work.

But shortly after, EPICmoh responds by temporarily ending his stream, asking Andy and his other viewers to remain online while he leaves the room.

EPICmoh, who even managed to find seven candles, then leads the stream in singing “Happy” Birthday for the young viewer.

Since being uploaded to TikTok, the video has received more than 245,000 likes. Users also applauded EPICmoh for going above-and-beyond for one of his fans.

“One of the most kind-hearted people I’ve ever seen on Twitch or TikTok,” TikTik user @mikey_himself says. “I could see it was all from the heart and not fake. I’ll see you at the top, king.”

The footage has since made its way to Reddit as well, where users praised EPICmoh’s kind actions in a post with more than 37,000 upvotes.

“What a fuckin legend, he made that kids day for sure,” a top-rated comment from u/Dajshinshin reads.

The moment remains EPICmoh’s most popular TikTok video to date.