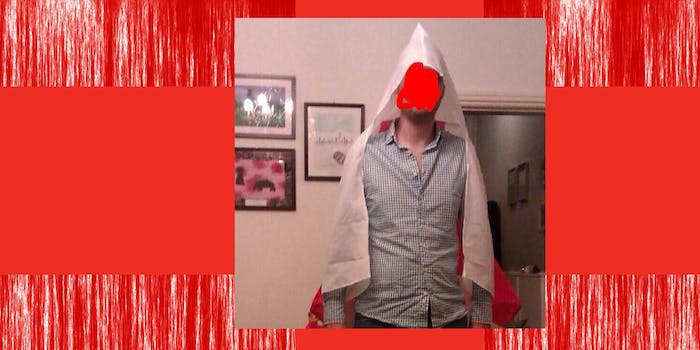 "It's simply a flag with a hood—nothing more, nothing less."

For only £3 you too can look like a member of the Ku Klux Klan! ASDA, a budget British supermarket owned by the Wal-Mart group has launched a wearable flag with a hood to celebrate the England soccer team. The only problem? Well, just take a look at the picture below.

Somehow this slight issue was not spotted during the product’s testing or conception, and it took users on social media to point out to the chain that it could very well cause offence. The item’s page on the ASDA website only wanted fans to “Support England in the world cup with this unique wearing flag!”

A supermarket spokesman told the Independent that the shop had already produced a Brazilian version of the klantastic flag for the World Cup which begins in Brazil later this month.

“We know there’s chatter on Twitter about our wearable World Cup flags, but it’s simply a flag with a hood – nothing more, nothing less.

“We opted for a hood on our wearable England and Brazilian flags as you never know what the British weather will bring.”

I have to go and get a KKK outfit from ASDA, purely for the outrage

Asda sticking to the line that “it’s simply a flag with a hood”… http://t.co/0Ub6f6PAH9 can’t see that ending well for them

Typically British, the spokesman concluded by saying, “We want customers to get behind the team without getting wet.”