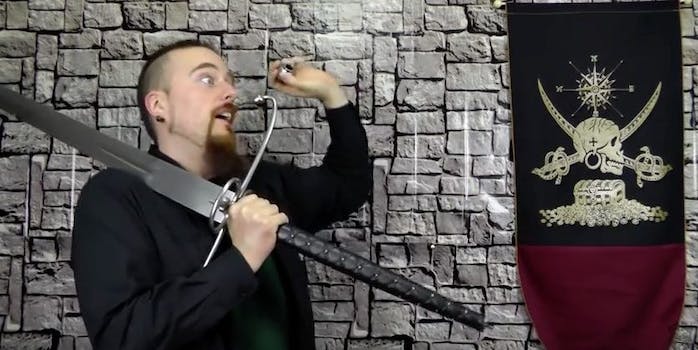 The move involves unscrewing the pommel of one's sword and chucking it at an opponent.

In case you had any doubt that anything can become a popular internet meme in 2017, here’s the story of an obscure medieval combat technique—one that may have been a joke, even at the time—that’s burning up the internet right now. The move involves unscrewing the pommel of one’s sword and chucking it at an opponent, then moving in for the kill. If you pull it off, you’ll “end him rightly.”

According to a very thorough primer on Know Your Meme, the “end him rightly” meme began with YouTuber and medieval European martial arts enthusiast Skallagrim Nilsson. Nilsson discovered “ending him rightly” in a 1430s German manual describing techniques for armored dueling, and described it in a video as “certainly unorthodox, to say the least.”

In a demonstration using his own (very large) sword, Skallagrim showed that unscrewing a pommel in the heat of combat would be completely impractical and probably end in death for the person trying it. The hilarious video turned pommel-throwing into the most popular running joke in the online medieval combat community (yes, that is a real thing).

In fact, some people argued it was a centuries-old joke, slipped into an otherwise serious fighting manual:

The technique was historically interesting to combat nerds because it pointed to a very early use of threaded sword pommels, but it spread to the internet at large because it gives us a new and funny away to say, as Nilsson puts it, “fuck him up real good.”

The video has been viewed more than a million times, but it dates back to 2014. The revival of “End Him Rightly” as a meme in 2017 has a different explanation: video games.

In Ubisoft’s medieval fighting game For Honor, released in February, there’s a throwable pommel item. As soon as fans on Reddit discovered this and linked it to the Skallagrim video, “end him rightly” was back in a big way.

Just a few days after End Him Rightly hit the top of the For Honor subreddit, a reference to pommel-throwing appeared in another video game. The gameplay trailer for Mordhau shows an armored knight unscrewing his pommel as he chases an adversary, then knocking him out with a throw to the back of the head.

This is almost certainly a reference to “end him rightly.” Skallagrim himself certainly thought so. He posted a reaction to the trailer where he says,”well played,” but he laments that he just can’t get away from the joke that has become his legacy.

“It’s still so overused. I mean, if people would at least just try to be creative about it instead of spamming it mindlessly everywhere. At least make it a good joke, Don’t just put it in a sentence just for it to be there,” he said.

“But this,” he added, referring to the Mordhau trailer, “Gotta give him credit. That’s pretty cool.”

“End him rightly” is still not a mainstream or “normie” meme that you’re likely to find on Facebook, and even dank meme teens on Reddit haven’t discovered it yet. Right now, it’s limited to gamers and nerds whomst love swordfighting. By next week, though, it could be blowing up the meme economy.

However this ends, you can be sure it will end rightly.