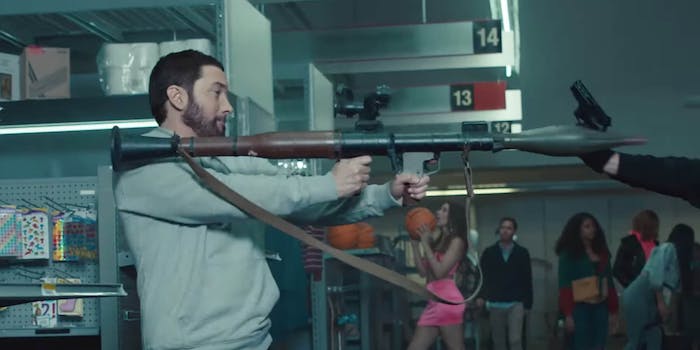 The side-by-side photos have become a trendy template online.

Eminem, no stranger to having his likeness turned into a meme, has unwillingly become one again.

The template for the meme features Eminem in his recently released “Godzilla” music video featuring the late singer Juice Wrld. At one point in the video, a masked man pulls a gun on Eminem. In response, the 47-year-old rapper produces a rocket launcher and blows his attacker away. The images served as a perfect template for memers, who quickly began spreading their own interpretations online.

The template was an instant hit. One of the first versions of the meme labeled the masked gunman as “my dad telling me that I’m adopted,” only to have the rocket launcher-wielding Eminem respond with “me calling him a virgin.”

From there, things only got better.

More of the memes started cropping up online. Different versions addressed childhood fighting, the NBA, and APEX Outlands. One person even used the meme to bring back jokes about Game of Thrones.

The rapper has been the face of several popular memes over the last few years, including the “Mom’s spaghetti” and “this looks like a job for me” memes. After more than 20 years in the spotlight, Eminem still has plenty of viral sustainability—whether he likes it or not.