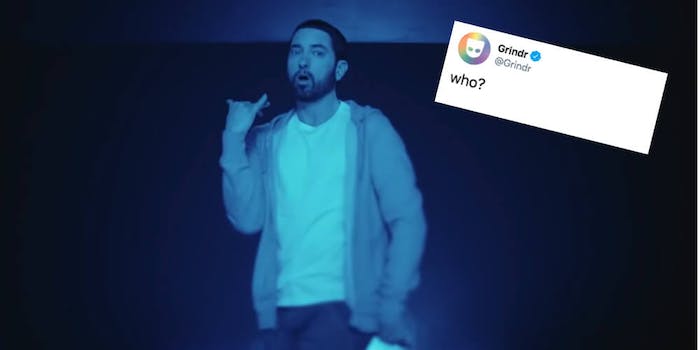 Eminem was partaking in the Dolly Parton meme challenge.

Grindr’s official Twitter account shaded Eminem after he used the LGBTQ-oriented dating and sex app for his version of the Dolly Parton meme challenge.

For the challenge, users produce four photos showing how they portray themselves on various social media apps: LinkedIn, Facebook, Instagram, and Tinder.

Parton launched the meme herself.

Except when Eminem created his own version of the meme, he swapped “Tinder” for “Grindr,” a popular gay dating app.

“Did I do this right,” he captioned the four photos, which were posted to his Twitter.

Did I do this right? pic.twitter.com/ZkoV5T4yxB

Users compared the shade to iconic Mariah Carey shade. When Carey was asked about Jennifer Lopez in 2001, the pop star simply replied: “I don’t know her.” Carey and Eminem also have a years-long feud of their own.

Eminem, who’s been previously roasted for using homophobic language in his music, has not responded to the shade.

Still, this isn’t the first time the rapper has mentioned Grindr. In 2017, he said during an interview with Vulture that he’s met dates on both Tinder and Grindr when opening up about his love life. “Dating’s just not where I’m at lately,” Eminem said.

After confirming he uses Tinder, he added:  “And Grindr. I also used to go to strip clubs.”