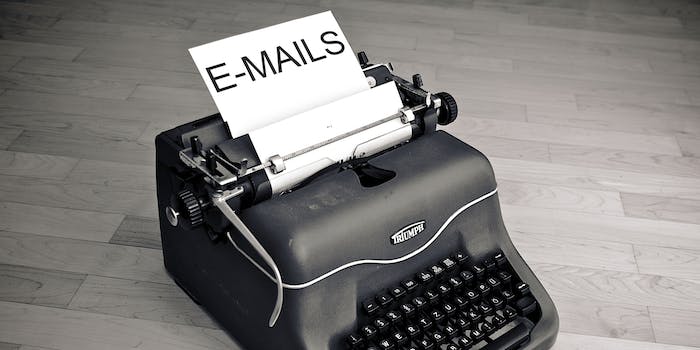 'E-MAILS' now means more than what you've got in your inbox.

A seemingly harmless word that connotes a sort of virtual mailbox: a place where you trade words with people you don’t trust with your phone number (like your technically impaired grandmother), and, more than that, a hub connecting your personal life to an assortment of professional ones.

But over the last few weeks, emails have been shaped into a utterance that shames people for their actions; it can stand alone on a piece of paper without further explanation. Thanks to thousands of anonymously leaked emails, Democratic party officials were caught talking shit about the Bernie Sanders campaign, which pissed off his supporters. DNC chair Debbie Wasserman Schultz stepped down and got an earful at the Florida delegation as protestors pointed fingers and held up vicious signs that read, “THANKS FOR THE HELP, DEBBIE! =)” and, yes, “E-MAILS.”

Quite a scene – @DWStweets addresses the Florida delegation to chants of "Bernie" and "shame on you" #DemsInPhilly pic.twitter.com/dlKqwOIO5T

MTV News offered an in-depth round-up of the DNC opening’s highlights, with “E-MAILS” comically placed in the “Winners” column underneath Michelle Obama. After co-writer Ezekiel Kweku tweeted out the “E-MAILS” part of the article and commented on how droll the whole thing was, an ambush of hilarious memes was sparked on Twitter.

The word, standing proud and tall, all by its lonesome, in a boring font and archaically hyphenated, has earned itself punchline status. It has been made a mockery, as people are finding a sign with no explanation an insufficient and lazy way to express disapproval.

But “E-MAILS” could also be said to have quickly mutated into the new version of “receipts,” the catchphrase that torched Taylor Swift after she was caught lying about her approval of Kanye West‘s “Famous.”

Kim has the receipts AND the invoices AND the purchase orders

It’s clear that “E-MAILS” can also be paraded around by those bearing anti-Hillary Clinton sentiment, due to her own security scandal. But at this point, it’s coming off as too satirical to cradle much meaning. As far as irreverent Photoshops go, however, it really packs a wallop.