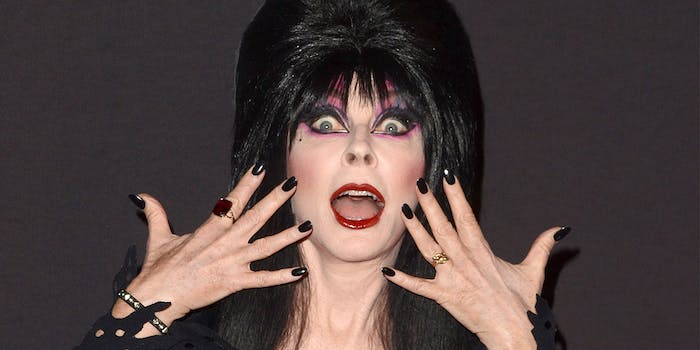 ‘Elvira is one of us’: Queer Twitter celebrates Cassandra Peterson coming out as bisexual

Many people were also excited to read about her 19-year relationship with another woman.

Cassandra Peterson, better known as Elvira, Mistress of the Dark, has been a queer icon for decades. Now with her new memoir, she’s finally assumed her throne as queen of the spooky bisexuals, revealing that she not only dated Tom Jones and Elvis but that she’s been happily settled down with her personal trainer, Teresa Wierson for 19 years, the Advocate reported.

The two women met at the gym when Peterson was still married. Initially thinking Wierson was a man, the two of them became friends after they met in the ladies’ room and Peterson realized she was actually a woman.

The two began a very close, but at the time platonic, friendship, eventually moving in together after going through a pair of devastating breakups. It was during this time, supporting each other and caring for each other, that Peterson realized she was attracted to a woman for the first time in her life. Shocked to discover it, and that she hadn’t realized before, Peterson and Wierson took the leap and have been happy together for the last 19 years.

Worried that their relationship would impact the Elvira brand, Wierson and Peterson chose to keep their relationship in the dark up until now. Despite her worries that it will leave some fans feeling betrayed or angry, that she “wasn’t what they expected,” Peterson has decided that now is the time, saying “I have to live with myself, and at this point in my life, I’ve got to be truthful about who I am.”

Fortunately for Peterson, the online reaction has been an ecstatic one.

Wild, joyous, flailing horror lovers and fans of people living their own authentic lives have been celebrating her coming out since the Advocate broke the news.

And in classic sapphic fashion, people are already crushing hard on Wierson based solely on the description of her as a hot, butch personal trainer even though no pictures have been released yet.

The fact that she chose to break the news during Bisexual Awareness Week of all times has given her announcement an added spice for bisexuals in particular given that we’re all a. prone to being spooky and b. starved of representation in general.

Basically this is the best Bisexual Awareness Week present anyone could have given us (other than a total end to biphobia but hey, you can dream right?) and everyone is just so, so happy for her.