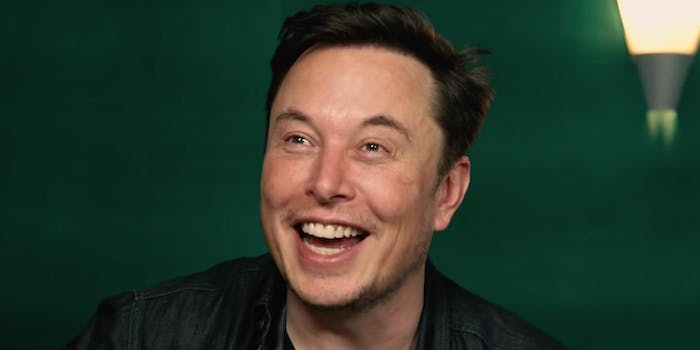 'The past couple years have been ... meme city.'

The duo can be seen discussing a wide-range of memes surrounding everything from Sen. Bernie Sanders (I-Vt.) to Musk’s arch nemesis: the gas-powered automobile.

Roiland also asked Musk how he felt about becoming such a prominent figure in the meme community.

“The past couple years have been, particularly last year, meme city,” Musk said.

While most of the memes received a mid-rating from Musk, the tech CEO appeared most excited about seeing his face placed on top of musician Post Malone’s.

The billionaire even broke down the alleged history of the word meme, attributing it to evolutionary biologist Richard Dawkins.

“Most people don’t realize that the origin of the word ‘meme’ is, I believe, the 1976 book by Richard Dawkins, The Selfish Gene…” Musk said. “Ideas propagate like genes based on a survival of the fittest paradigm … Only the strongest memes survive.”

Rounding out the video, Musk burst into hysterical laughter after being presented with a photo of what seemed to be a dead deer in a pool. The meme stated simply: “Why my dolphin not working lol.”

The tech entrepreneur had hinted on Twitter late last month that an appearance on meme review was potentially in the works.

Musk’s arrival comes amid a months-long battle between PewDiePie, YouTube’s most subscribed to creator, and T-Series, an Indian music production company. At the time of publication, T-Series was trailing PewDiePie’s more than 86 million subscribers by less than 20,000.

Musk’s meme commentary will likely result in a jump in subscribers for PewDiePie, helping the Swedish YouTuber keep his crown just a little longer.