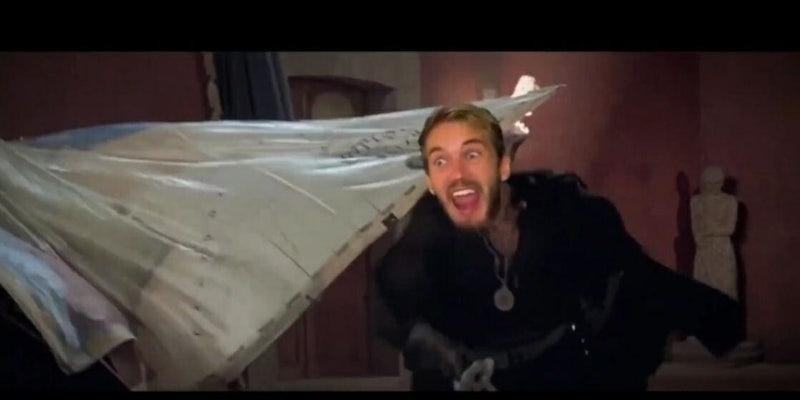 PewDiePie vs. T-Series rivalry gets the epic YouTube movie trailer it deserves

PewDiePie has received plenty of help to remain the world’s most popular YouTube star. As he battles with Indian record label T-Series to stay as the YouTuber with the largest number of subscribers, PewDiePie is still getting reinforcements.

This time, it’s come in the form of an epic movie trailer.

YouTuber Billy Crammer told the Daily Dot in an email he was inspired by the Batman v Superman movie and that he tried to fill his trailer with as many memes as he could.

“If the fight between PewDiePie and T-Series got turned into a movie, this is probably what it would look like,” Crammer said. Here’s the final product (complete with an epic movie trailer voiceover and an epic soundtrack).

(And in case anybody is thinking about making a copyright claim on the video—like what’s happened to TheFatRat and AngryJoeShow recently—he wrote in his video description, “Copyright Disclaimer: This video is protected under fair use, due to the fact that it conceptualizes a non-existing film idea. The video compiles of clips from existing movies to create a new vision and new meaning for a movie. The video displays visual commentary on how a film could look.”)

As of this writing, PewDiePie has 80.3 million subscribers (a few days ago, he was the first YouTube channel to overcome the 80 million barrier). T-Series is trailing by about 650,000 subscribers.

In August, PewDiePie’s five-year reign at the top of the YouTube subscriber standings seemingly was coming to an end, and it was predicted that T-Series would surpass him by the end of the October. At one point, T-Series was only about 100,000 subscribers behind PewDiePie.

That’s when PewDiePie’s supporters went on the offensive. YouTube star MrBeast began erecting billboards to convince people to subscribe to PewDiePie’s channel. Hackers broke into every day people’s printers and Chromecasts to keep PewDiePie’s name out there. Even YouTube’s recent spam account deletion of 1.7 million accounts gave a boost to PewDiePie’s lead.

It still seems inevitable that T-Series eventually will topple PewDiePie. But as a Photoshopped PewDiePie does in the film trailer, he (and his supporters) are likely to just keep on fighting until the end.