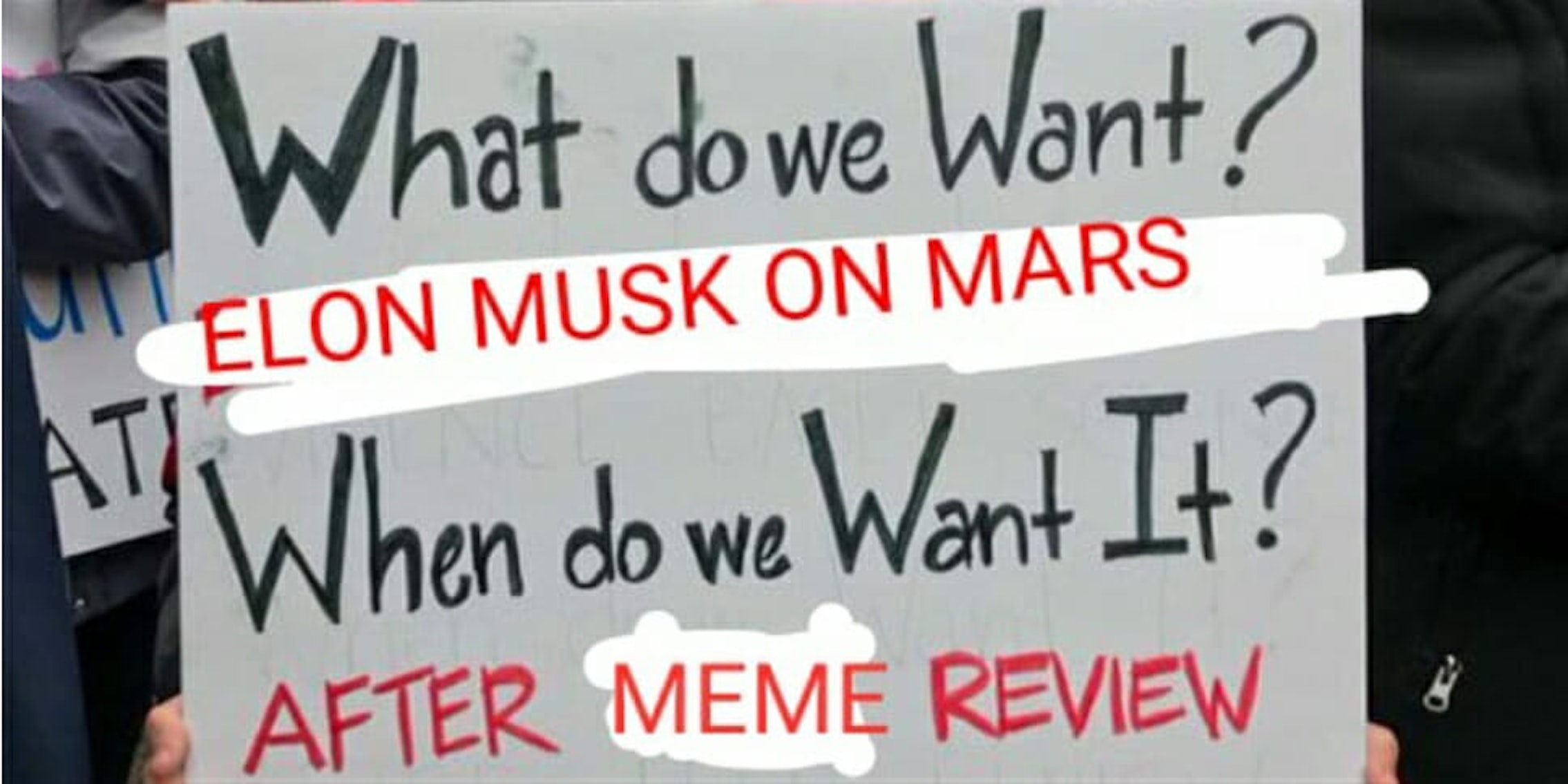 What is real anymore?

Elon Musk, the co-founder and CEO of Tesla, is taking a break from his day job to host PewDiePie‘s meme review.

The billionaire tweeted confirmation of the collaboration on Monday. “Did meme review last night with Justin Roiland from @RickandMorty,” he wrote.

Musk teased the internet with the potential for him to co-host back in January, before disappearing for nearly a month. Last week the SpaceX founder abruptly reappeared, reigniting conversations about him guest-hosting the massively popular YouTuber’s meme review with a brief tweet.

Did meme review last night with Justin Roiland from @RickandMorty

The announcement is sure to be welcomed by fans of PewDiePie, who’s been fighting to retain his position as the largest channel on YouTube for months. Indian music production company T-Series has spent months barely trailing PewDiePie, getting closer to surpassing his follower count.

The announcement from Musk is sure to boost Pewd’s numbers, particularly with the addition of Rick and Morty creator and voice actor Justin Roiland. Between Musk’s name recognition and the massive popularity of Roiland’s animated creation, PewDiePie should be able to stave of T-Series for at least a few more months.

Not everyone has faith that the collaboration is real, however. Many fans have voiced their disbelief online, with some confusion as to whether Musk’s collab with Roiland is in conjunction with PewDiePie, or a separate effort entirely.

PewDiePie has not yet confirmed that the meme review Musk tweeted about is, in fact, for his channel. An early morning Tuesday tweet featuring a fan’s Tesla seemed to hint toward the news, however.

In his fight to stay on top, PewDiePie also recently addressed YouTube’s most viral conspiracy theory. Shane Dawson, another prominent YouTuber, theorized in a recent video that Chuck E. Cheese’s pizzas are not what they seem. He reignited a decade-old theory that the restaurant chain recycles slices from old pizzas and serves them to customers.

Chuck E. Cheese quickly, and unequivocally, denied the accusation in a statement to the Daily Dot.

In a hilarious take on the conspiracy theory, PewDiePie teased the company for its suspicious denial. “No conspiracies here,” he said. “That sounds a lot like (sic) someone who was part of a conspiracy would say, Chuck E. Cheese.”

Immediately after, however, he revealed that he doesn’t buy into the theory. “Most likely, what they do is they cook a lot of pizzas, and based on what people order… they just distribute the pizza slices accordingly.”

He called the conspiracy theory a “good laugh.”