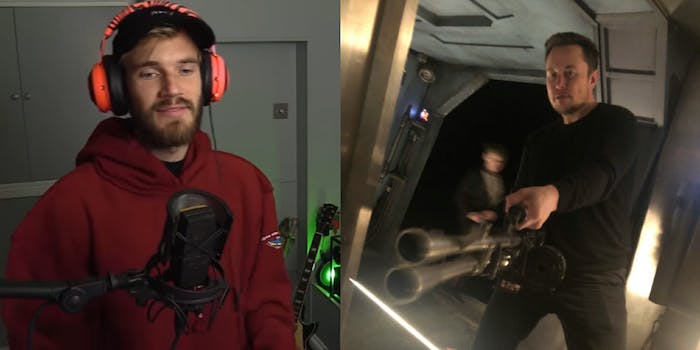 Two of the internet's most high-profile white dudes are feeling each other.

There is a strange bromance unfolding between Elon Musk and Felix ‘PewDiePie’ Kjellberg.

For months now, PewDiePie fans have been clamoring over the rumored potential for Musk to make a guest appearance on one of PewDiePie’s “meme review” videos. In the videos, Pewds breaks down the most recent internet memes with amusing commentary for his fans.

Even MrBeast, a popular YouTuber known for his philanthropy and amusing content, got in on it. A longtime fan of PewDiePie, MrBeast responded to Musk’s Tweet by saying “I triple dog gare you to host meme review.” In response, Musk merely said “$5.” The negotiations continued before MrBeast finally got Musk to agree.

You drive a hard bargain, but … ok

Thank you for your contribution, Tesla is now the official car of the meme community. We will drive it with pride.

After the exchange, however, Musk disappeared. There was no more discussion of him guest-hosting the meme review after his Jan. 27 agreement with MrBeast. The weeks crawled by with no indication that Musk would adhere to their agreement, and fans gradually lost hope. Then, yesterday morning, the response finally came.

Commenting on a January Tweet from PewDiePie asking him to host, Musk said “Sorry. Had a vital mission in Norway. Now I am back.” His words indicated to fans that he may still be on board to guest-host. In response, PewDiePie kept it simple. “Slightly suspicious,” he said, “but granted.”

There is still no guarantee from Musk that he will follow through on his hints and actually host the meme review. If he does, he would certainly be the most high-profile guest PewDiePie has ever had on his show. If not, a disappointed army of PewDiePie bros will have to watch their favorite creator break down the newest memes solo.