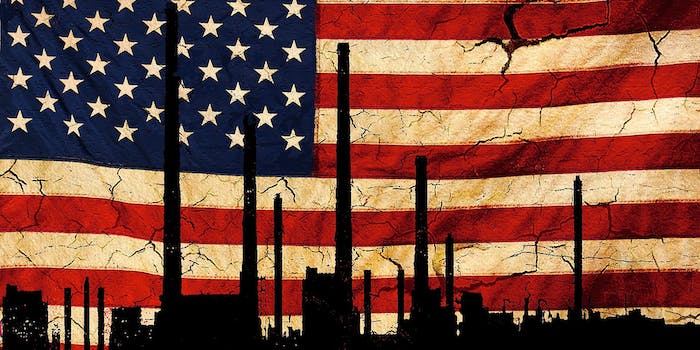 Hillary Clinton won the popular vote. She just didn't win where it mattered most.

The electoral college is the bane of every freshman political science major’s existence. It’s complexity and opaque nature make it an easy target for armchair pundits, anti-establishment types, and other people with just enough knowledge to hang themselves. Support for abolishing the electoral college is widespread and bipartisan, with 61 percent of Republicans and 66 percent of Democrats stating they would personally vote for such a law.

After witnessing the cold logic of Great Britain’s election in May 2015, the U.S. process of electing our leaders is a strange machine that creates an even stranger political environment.

Why should I be responsible, the electoral college doesn't even trust me

The world of the electoral college is one in which most presidential primaries are settled in just 10 states out of 50. That means presidential candidates spend most of their in Iowa and New Hampshire, two states that represent just 1.3 percent of the U.S. population. The process gives influence in almost arbitrary ways, giving so much empowerment to elderly Floridians that not a single major candidate is brave enough to even mention entitlement reform.

The three most populous states—California, Texas, and New York—attract very little attention from presidential candidates, even though they are important harbingers of the drastic future facing most American cities. In California, Silicon Valley is spreading mass gentrification from San Francisco to Los Angeles, San Diego, and Sacramento, California. On a consistent basis, the more these companies—which create tons of wealth but relatively few jobs—move into your area, the harder it becomes to be a middle-class citizen.

In Texas, the only red state in this trifecta, a similar rush of tech money is accompanying what was already a nascent disparity issue in the state’s largest cities. In the last 40 years, the top 10 percent of Texans have gone from earning a little under a third of wealth to well over half of all income today.

Similarly, New York City has grown vastly more expensive over the last decade and is a paragon of income inequality. According to the Census Bureau, New York has the greatest overall income inequality in the country. As the economic recovery helps the top 20 percent of New Yorkers regain lost wealth, the rate of people living under the federal poverty line has continued to grow since 2013. Much like in California, gentrification is on the march in New York; late last year, Brooklyn became the least affordable housing market in the country.

The electoral college inherently forces candidates to focus not on the most votes but on their chances of winning states with the most electoral votes. This is why the last five elections—including Donald Trump‘s 2016 win—have largely been decided by large swing states like Ohio and Florida.

A national popular vote would look very different indeed, as candidates would be forced into the most populous centers of their parties’ support. For Democrats, this would look like a lot of tours through California and frequent stops in New York City. For Republicans, it would mean a lightning campaign through the vast rural centers and stops in conservative cities like Phoenix, Salt Lake City, and Fort Worth, Texas.

But as Eric Black has pointed out in his analysis of such a system, “California has a population of 38 million, many millions of whom are not yellow dog Democrats. The Republicans would be fools not to try to maximize their vote there.”

This is why the last four elections have largely been decided by large swing states like Ohio and Florida.

What this would mean for governance is a redistributed influence on both political parties on what issues they really care about. When a state has undue influence thanks to electoral math, it wields greater power over how the federal government chooses to work.

The two great examples of this are agricultural subsidies and, until recently, Cuban-U.S. relations. Because of the great importance played by Iowa in our primary process, debates about the Farm Bill tend to focus less on the massive subsidies it hands out to agribusiness and more on food stamps. Similarly, one of the reasons Cuba was the last communist state with which the U.S. normalized relations was the overpowered emphasis of anti-Castro Cuban-Americans in Florida.

This leaves the issues important to urban residents largely on the fringes. Despite the fact that most Americans currently live in an urban center, the only candidate who seriously discussed income inequality in 2016 was Bernie Sanders (D-Vt.). Sanders called for a “political revolution” to change the divided power between rich and poor. He called it “immoral when so few have so much and so many have so little.” This kind of talk has had Sanders replace Elizabeth Warren’s place in the heart of many liberals who were looking for an alternative to Clinton.

But it’s not how you win an election. As has become cliche to joke about, winning the presidency means deep-fried goods at Midwest state fairs, pointless straw polls, and spending your autumn in Ohio or Florida.

The electoral college not only allows for such a disparity but has likely manufactured it. While the lacking discussion on income inequality in American politics is caused by many things—lest we forget the strengthened power of corporations post-Citizens United—the electoral college allows for candidates to ignore the concerns of the urban poor even more than they do as politicians.

Editor’s note: This article has been updated to reflect the results of the 2016 election.