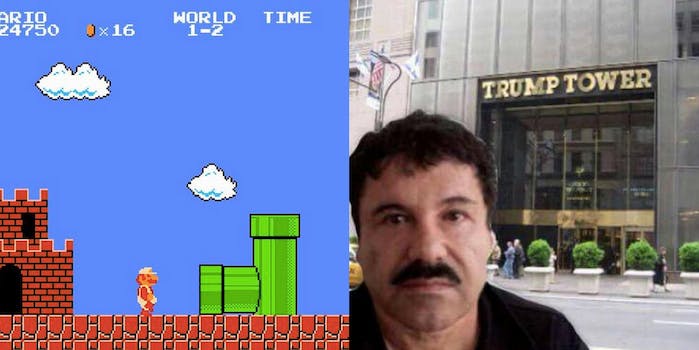 Drug kingpin Joaquin “El Chapo” Guzman sparked a national manhunt this weekend with his illustrious escape from a maximum-security prison in Mexico. While the Mexican government is busy trying to figure out exactly how Guzman escaped Altiplano Federal Prison using a hole in the shower area that lead to a tunnel, the Internet has set to work doing its thing: memes.

El Chapo, whose massive drug-smuggling operation plays a significant role in U.S.–Mexico border violence, has inspired memes that have run wild across networks like Imgur and Instagram. Meme-makers have done everything from mashing up his escape with video games to bringing Donald Trump (who recently made racist remarks about Mexicans) into the mix.

Check out some of the best ones.

Translated: “That awkward moment when El Chapo went out on Saturday and you didn’t…”

While the Internet might be laughing at the escape that seems to have baffled the Mexican government, it’s worthwhile to remember all of the crime lord’s dangerous activities that landed him in jail in the first place.