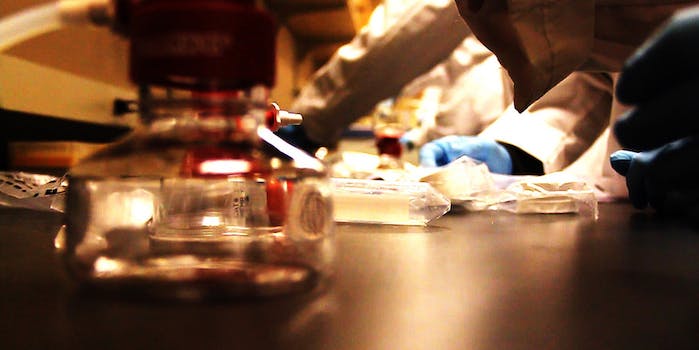 Scientists are educating the public about Ebola for free, but no one's listening.

Last Friday, governors from New York and New Jersey imposed a mandatory quarantine policy for any persons found to have contact with Ebola-infected individuals; a quarantine that immediately sprung into effect as nurse Kaci Hickox, who had recently spent time in Sierra Leone as a nurse for Doctors Without Borders, touched down in Newark, N.J. By the weekend’s close, it became apparent Hickox was the victim of scientific ignorance and panic that could have been easily rectified through a source that might seem surprising at first: The Internet.

The solution to Ebola panic could be just a few Tweets away, with so many scientists on the platform using their knowledge and experience in an attempt to educate the public. But it would seem that the public isn’t listening.

President Ebola and the Democrat Party LET ebola come to the USA and all the virus’s the ILLEGAL IMMIGRANTS are bringing with them. NOV 4th

Give me your tired, your poor, your Ebola infected, your undocumented immigrants and your non-terrorist jihadists. #PoliticalCorrectness

Worried about Ebola? Obama is about to grant amnesty to thousands of illegal immigrants that will not go through proper checks & procedures.

Why does our President want to raise our electric bills, ruin our health insurance and FLOOD our country w Ebola & illegal immigrants? #tcot

What happened to Hickox as she was humiliated in unnecessary quarantine and attracted the attention of the nation only marks the latest in what science writer Maryn McKenna has coined “Ebolanoia.” Other not-so-proud trendsetters include Liberian immigrants in Philly being isolated under suspicion of Ebola, only to be easily diagnosed with an allergic reaction soon after; middle schoolers recently relocated from Senegal being beaten and taunted with cries of “You’re Ebola!” in the Bronx; and doctors in California refusing to examine a child who might have had contact with someone from West Africa. In Louisana, state officials have asked that any medical workers that have recently traveled to Ebola-affected areas not attend the American Society for Tropical Medicine and Hygiene’s annual meeting, to be held in New Orleans this weekend. The irony of barring Ebola experts from the world’s largest scientific meeting on diseases (like Ebola) had apparently been lost on them.

On Tuesday, Australia became the first developed nation to explicitly shut down its borders to Liberia, Sierra Leone, and Guinea, the countries hardest hit by the virus, now approaching 5,000 in total reported death tolls. In an editorial for the New England Journal of Medicine, seven researchers warned that these bans and quarantines do little to protect anyone and only further stoke fear of a disease that, when properly prepared for, poses little threat to a major civilian populace. More serious is the possibility that health care workers are discouraged from providing aid to the areas still afflicted by Ebola or that myths about the disease are reinforced by the panicked, unnecessary reactions of government officials.

For those with a long memory, the brushfires of “Ebolanoia” must seem reminiscent to those of the panic induced by the emergence of HIV/AIDS in the ‘70s and ‘80s. As Steven Petrow, a journalist who extensively covered HIV, wrote in a Washington Post piece earlier this October, the similarities are easy to spot: From the demands of quarantine by politicians to the severe travel bans enacted by nations. As Petrow writes, the U.S.’s own HIV travel ban was only finally struck down in 2010 by President Obama, who unlike Reagan at the time, has stepped out in front of the Ebola scare and emphasized his administration’s trust in the scientific community. Yet as a society, we seem as eager to ostracize and condemn people for the mere suspicion of disease as we did back 30 years ago.

But there is something dramatically different this go-around, one that Petrow and others have only briefly touched on: Twitter. Far from the glare of mainstream news sources who happily spin misleading perspectives about Ebola, there are science writers and scientists like Kelly Hills, Heather Lander, and Ian M. Mackay on their social media accounts, attempting to educate and correct misinformation about Ebola in 140 characters or less. Mackay, a virologist, runs a blog where he has graphed the extent of the disease as it’s progressed. Landers, a pathologist who has worked with some of the most dangerous viruses in the world, also maintains a blog where she tries to “bridge the dangerous gap between the science of infectious diseases and public misperception.” Nestled next to her bio is a section on where to best donate money to the Ebola relief effort. Maryn Mckenna, of “Ebolanoia” fame, maintains a Tumblr on that same theme.

For those maligning Africans for eating “bushmeat,” but American hunting is OK, read this (via @rocza) http://t.co/AWLxXSWEdS

Much of the work of these writers and scientists (of which many more can be found on this handy listicle by Kobby Blay) is coming out of their own free time and at their own expense, and they reflect a possible change in the way health experts communicate with the public, one sorely needed. According to a recent Rutgers-Eagleton poll of New Jersey residents, the majority believed that an Ebola outbreak could strike the state. Even more depressingly, it was those who had watched the most media coverage about Ebola that turned out to be the least informed about how it actually worked. That coverage, needless to say, is a sharp contrast to the frequent, helpful updates provided by the World Health Organization’s Twitter account.

Bellevue employees are shunned because people are uninformed about Ebola. http://t.co/SoHrKvWfYq

In her introduction, Heather Landers explicitly notes that she was prompted to start writing as a result of the constant misinformation she saw in the media. Her posts have covered everything from why Ebola is likely to never become airborne to discussions of the experimental treatments we have available. She’s even responded to Reddit threads about her posts. Other accounts like @EbolaAlert are manned by actual volunteer professionals from Nigeria, reporting the latest in Ebola news from their Twitter and Facebook pages. Far from being restricted by the character limits, their tweets contain concise summaries of the epidemic’s spread. They even dispel rumors of infection in other countries. It’s the World Wide Web being used as an easily updatable, easily correctable disease surveillance system and we’re all the better for it.

We often lament the cat-filled excesses of the Internet; but, provided we’re steered the right way, it might just be the perfect cure to our fear.