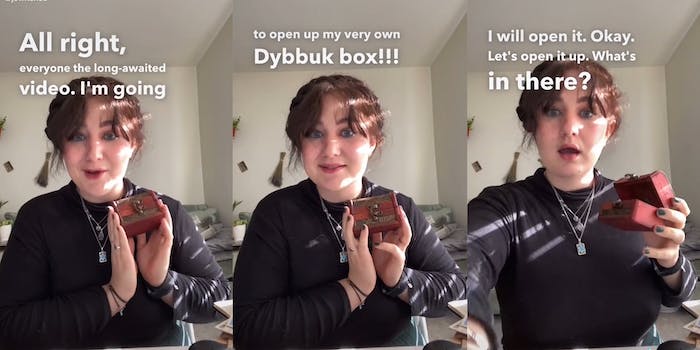 Some Jewish content creators are calling out the fake artifacts as harmful to the community.

Since 2003, dybbuk Boxes have been a hot button item for collectors and fans of the paranormal. Allegedly containing the sealed away spirit of a dybbuk, a being from Jewish folklore, there have been several films and numerous videos on YouTube and TikTok about buying and opening them in the years since they made their debut onto the paranormal scene. The only problem is that dybbuk boxes aren’t real—and I don’t mean that in the skeptical sense.

If you search for mentions of dybbuk boxes prior to 2003, you won’t be able to find any, which might seem strange to the believer but has one very simple explanation. In 2003, Kevin Mannis, purveyor and restorer of antique furnishings, made them up.

It’s something that Jewish educators and content creators have been trying to tell people for years, but with little success as people put their love of a creepy story ahead of listening to and respecting other cultures.

As Zo Jacobi, creator of the Jewitches podcast, explains, a dybbuk is a spirit of a human being who died without completing teshuvah; repentance and atonement. Unable and unwilling to transition to the next stage because of this, they attach themselves to a living being, preferably a human but in some cases an animal like a goat or a cat. A dybbuk, according to actual Jewish folklore and belief, can’t attach to an inanimate object—it has to be a person or at the very least a living being. The dybbuk box, according to the belief system it’s drawing on, cannot possibly exist.

Mannis’ dybbuk box, and the story he concocted to go along with it, completely ignores all of this and the wealth of established mythology surrounding dybbukim in Jewish culture. Something he said himself during the interview with Input magazine where he finally admitted to having invented the dybbuk box. “It’s kind of an oxymoron, dybbuks don’t live in boxes,” he said. “So a dybbuk box, by definition, doesn’t make any sense.”

Mannis’ original claims about the box were that he’d acquired it at an estate sale from the granddaughter of a Holocaust survivor, who told him never to open the box because there was a dybbuk sealed inside it. In fact, the box was an ordinary wine cabinet, purchased at a yard sale, and which he then doctored and filled with a selection of odd, occult seeming objects, before creating a listing for it on eBay. The listing claimed that a series of unfortunate events had befallen him and the people around him after he opened the box, and while some of the events—such as his mother’s stroke—really did happen, their connection to the box itself was purely fabricated.

While fabricated occult objects are a dime a dozen online and most of them are swiftly forgotten about, something about the dybbuk box captured the online paranormal communities attention. Significant numbers of artists and con artists began fabricating their own dybbuk boxes and placing them for sale online, while content creators bought and opened them on camera, sometimes claiming a string of bad luck and tragic events followed.

Things hit a new peak in 2018 after Zak Bagans, famous ghost hunter and owner of the Las Vegas Haunted Museum, acquired the box and placed it in his museum where musician Post Malone claimed to have been cursed by it—blaming his near plane crash, actual car crash and having his house broken into on it.

But every year in the run-up to Halloween, there’s a new resurgence in dybbuk box content, and despite Mannis having finally admitted he fabricated the entire thing, this year is no exception. While some are very clearly staged and perhaps intended to be interpreted as fiction, others are presented in all seriousness by their creators.

Some creators have acknowledged that dybbuk boxes are a recent invention and have no foundation in real folklore or spiritual practices, but they continue to use the tag when uploading more videos of themselves unboxing yet more of the wax-covered dybbuk box style items.

And while some don’t seem to understand why perpetuating the idea of the dybbuk box as a genuine Jewish practice is harmful, there’s a lot of antisemitism imbued into Mannis’ “interactive horror story in real-time”. From blaming the Korean War and other disasters on the imagined occult activity of Jewish Holocaust survivors, to antisemitic imagery, including antisemitic caricatures of Orthodox rabbis, dybbuk boxes fall into a long tradition of antisemitic tropes and conspiracy theories that cause real harm.