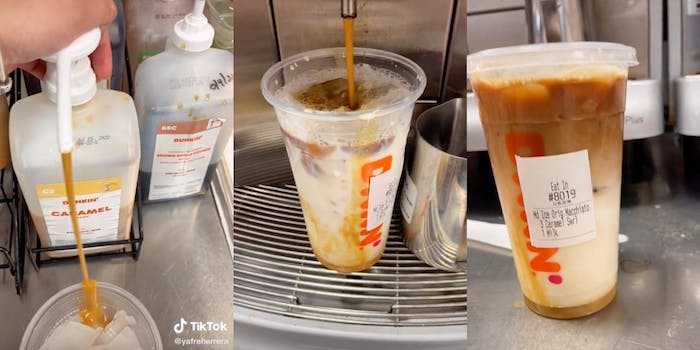 ‘This why it tastes different every time’: Dunkin’ worker shows how she makes an iced macchiato in viral TikTok

'Every single thing was done wrong in this video.'

An apparent Dunkin’ employee shared her process for making an iced macchiato on TikTok, and viewers had a lot to say about her actions.

The worker, known as user @yafreherrera on TikTok, often posts about working at Dunkin’ and has amassed a following of 30,700 followers on the platform. The iced macchiato video received about 1.6 million views as of Sunday.

In the video, the alleged worker can be seen labeling a Dunkin’ cup then using the plastic cup as a scoop to fill itself with ice. After that, she placed the cup on the counter in front of the syrup pump and gave it two pumps. But both pumps drastically missed the cup, shooting onto the counter and the side of the cup.

Ignoring the mess, the employee grabbed the cup and filled it with milk then added the espresso, which also splattered out of the cup. Then, she added the cup’s lid, signaling the order was ready.

Viewers were appalled, saying that every step of the worker’s process was wrong. The TikToker appeared to “like” many of the critical comments.

“every single thing was done wrong in this video,” one viewer commented on the video.

One TikToker wrote, “This hurt to watch.”

“this why it tastes different every time,” another user speculated.

Several viewers pointed out how the employee added syrup to the cup, while others noted that she didn’t stir it in with the milk.

“Girl you didn’t even stir the swirl and milk,” one viewer commented with a crying emoji.

“Missed both times,” someone else said, referencing the syrup pumps.

“how you miss the cup 2 times,” another viewer asked.

Other viewers chimed in, saying the video is an example of why they prefer not to get their coffee from Dunkin’.

“Bruh I ain’t EVER coming here,” one viewer wrote,

Another viewer commented, “this is why ppl don’t go to dunkin.”

The Daily Dot reached out to the creator via TikTok comment and Dunkin’ via email.