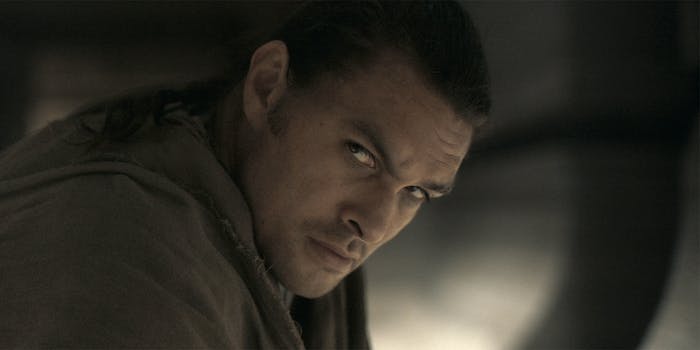 'Dune' is just the beginning.

Dune—the first of two planned films from famed director Denis Villeneuve—has finally arrived in theaters and on HBO Max to immerse longtime fans and new viewers alike into the world of Arrakis. As both thoughtful analysis and the memes flow, a clear fan favorite is emerging.

Who is Duncan Idaho?

If you’ve read Frank Hebert’s seminal 1965 novel (or further into the six-book series), it will come as little surprise that Duncan Idaho, the swordmaster who served House Atreides, is on his way to becoming as popular a character as he was in the books. There’s a lot to like about Duncan Idaho, even among those who might not love the newest adaptation of Dune; Jason Momoa, who plays Duncan in the 2021 film, compared him to Han Solo, which feels apt. He’s loyal, friendly, unyielding in battle, and he has the earliest and one of the more absurd names in Dune—and this comes in a book centered around a teenage boy who may or may not be the messiah named Paul.

Duncan Idaho is a name that sounds like sci-fi nonsense or the result of a Twitter prompt, i.e. “Your Dune name is your first pet’s name plus your home state.” Duncan is a Scottish name (and cited as an anglicized version of the Scottish-Gaelic name Donnchadh) that’s been in use for centuries and was the name of a character in William Shakespeare’s Macbeth. An initial claim about the name Idaho in the 19th century is that it came from a Native American word meaning “gem of the mountains,” but those claims were debunked by contemporaneous sources, who claimed it was a made-up word; a recent column on the name Idaho’s possible origins leave more questions than answers. And Dune is set so far in the future that the state of Idaho may be little more than a fleeting memory that a Mentat (a human-computer used in lieu of an actual computer in a society that bans them) could recite off the top of their heads.

Mashed together, Duncan Idaho just might be one of the all-time great sci-fi names.

Duncan Idaho has been portrayed by Richard Jordan in David Lynch’s 1984 film, James Watson in the 2000 series, and Edward Atterton in the 2003 series. But it’s Momoa who’s taking the reins and infusing even more heart in Villeneuve’s Dune. In Momoa’s hands, Duncan is a charming shit-stirrer, someone who isn’t afraid to make fun of Timothée Chalamet’s Paul Atreides by making Paul think that he has muscles. He can easily pick Paul up and swing him around in a bone-crushing yet comforting hug, and every time Duncan shows up, everyone seems happy to see him. He’s also a key component in Duke Leto Atreides’ (Oscar Isaac) plan to rule Arrakis: Duncan is sent early to propose an alliance with the indigenous Fremen population, where he quickly learns their ways and is able to explain them to House Atreides.

“Duncan Idaho is a cross-mix between a samurai and one of the best knights in the galaxy, and also is known to be a beautiful man,” Villeneuve told Entertainment Weekly in September 2020. “So I needed all those elements. Jason also brought calm. It’s a Duncan who is very calm, very patient, with the deep soul of an explorer. He’s someone where you feel that if s— hits the fan, you want to be behind that guy! You know he will protect you.”

Duncan loves adventure and risk as much as anyone but he knows better than to let Paul head to Arrakis early even though Paul, haunted by one of his prophetic dreams, is trying to stop something terrible from happening to Duncan. And as we find out toward the end of Dune, Paul’s vision of Duncan Idaho’s death comes to pass.

Later in the film, after Paul and Lady Jessica (Rebecca Ferguson) are captured and escape their House Harkonnen captors, they run into Duncan and the impartial Dr. Liet-Kynes (Sharon Duncan-Brewster), who brings Paul and Jessica to a research station and gives them stillsuits to help them survive Arrakis’ harsh conditions. As Leto’s only advisor known to have survived the massacre—Gurney Halleck (Josh Brolin), the weapons master, and Thufir Hawat (Stephen McKinley Henderson), House Atreides’ Mentat, both survive in the book but their fates are less clear in the film—Duncan instantly pledges his loyalty and services to Paul. When Sardaukar soldiers (who are loyal to the emperor who allowed House Atreides to be wiped out) storm the research station, Duncan seals Paul, Jessica, and Dr. Liet-Kynes in a room so they can escape while he tries to take down as many soldiers as he can.

Although the Sardaukar soldiers eventually kill him, Duncan Idaho manages to get up even after he’s been stabbed multiple times to kill a few more soldiers and goes out in a blaze of glory. (According to Children of Dune, Duncan Idaho took down 19 soldiers before he died.)

Despite that discernable fact, that Duncan Idaho dies in Dune the book and 2021’s Dune, he is also somehow the only character who appears in all six of Frank Herbert’s Dune series. How, you might ask? For one, thank the fans: According to The Road to Dune, which included material from Frank Herbert, Herbert’s son Brian, and Kevin J. Anderson (the latter two who would write stories set in the Dune universe after Frank Herbert’s death), “Frank decided to ‘revive’ Duncan Idaho in later novels because the fans liked him so much.” By the end, Duncan Idaho is essentially the main character of the Dune series.

Logistically, it’s one of several instances where later Dune books get downright wild. Duncan returns in Dune: Messiah thanks to a version of clones called gholas, which are created from cells of a dead person and grown in a tank into a human shape and can sometimes remember memories from the person they were grown from. Going by the name Hayt, he is designed to psychologically screw with Paul Atreides (now the emperor) and eventually programmed to kill Paul by his makers, an act that fails and eventually leads to Hayt, now completely loyal to Paul, regaining all of Duncan’s old memories all the way up to his death.

He later falls in love with and marries Paul’s younger sister Alia (who hasn’t been born yet in the 2021 film) and goads Stilgar (Javier Bardem in the 2021 movie) into killing him in an effort to stop his wife (and regent ruler of Arrak), who’s possessed by the memory of an ancestor.

But that’s not all. Paul Atreides’ son Leto II merged with a sandworm (yes, really) and ruled over Arrakis for about 3,500 years with many, many Duncan Idaho gholas by his side; whenever one died—or, more often than not, was killed by Leto II himself—another one was put in his place. Duncan was a connection to his father and grandfather before him, and thanks to advancing ghola technology, Duncan is able to remember his original life but nothing that followed. It’s only once Duncan Idaho ends up in the hands of the Bene Gesserit that the final iteration of the Duncan ghola is given access to 6,000 years’ worth of memories spread across hundreds of gholas.

It seems unlikely that Villeneuve is going to touch any of this. The ghola device doesn’t come into play until book 2, and Villeneuve still has the latter half of Dune to adapt before touching later books. But hey, if incorporating any of this means we get more Jason Momoa as Duncan Idaho, it might be worth just how weird Dune could get.