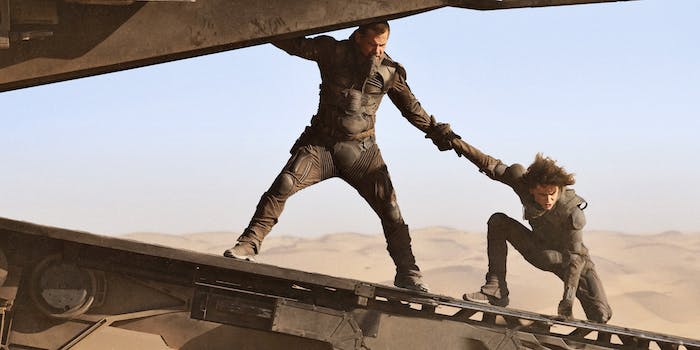 Sorry, you won’t be able to watch the new ‘Dune’ until next year (updated)

It's the latest movie getting pushed back because of the pandemic.

Dune, Denis Villeneuve’s upcoming adaptation of the Frank Herbert novel starring Timothée Chalamet, Zendaya, and Oscar Isaac, will be pushed back nearly a year from its original Dec. 18 release date.

The reason for Dune’s delay, like many big tentpole movies this year, is due to ongoing concerns about the COVID-19 pandemic affecting box office returns. Many movie theaters in the U.S. and around the world have reopened, but in the U.S.—where COVID-19 has caused more than 210,000 deaths and is still a major problem in much of the country—many still feel unsafe going to an indoor movie theater or flat-out refuse to do until there’s a vaccine for COVID-19.

Notably, Dune trailers released online last month didn’t include a release date. News of Dune’s delay comes days after No Time To Die was delayed a second time for an April 2021 release. As a result, Cineworld is closing all of its Regal Cinemas theater chains in the U.S. and Cineworld and Picturehouse theaters in the U.K.

Disney also pushed back most of its major films in recent weeks. The Empty Man (Oct. 23), Death of the Nile (Dec. 18), and Soul (Nov. 20) are still on the docket for 2020, although reports indicate that Soul might be released on Disney+ instead. And although some smaller indie films are getting theatrical releases, the release window is much shorter—and they often don’t have the grand financial expectations that blockbusters have from the studios that release them.

Update 8:43am CT, Oct. 6: Warner Bros. has now shifted the release dates of several upcoming films. Along with The Batman‘s new release date of March 4, 2022, Shazam! Fury of the Gods is being pushed back by several months from Nov. 4, 2022, to June 2, 2023. The Flash will now take Shazam’s vacated Nov. 4, 2022 date while The Matrix 4 will now be released several months early on Dec. 22, 2021. Two other films, Black Adam (starring Dwayne Johnson) and the Minecraft movie, have both been removed from Warner Bros.’ release schedule for the time being.