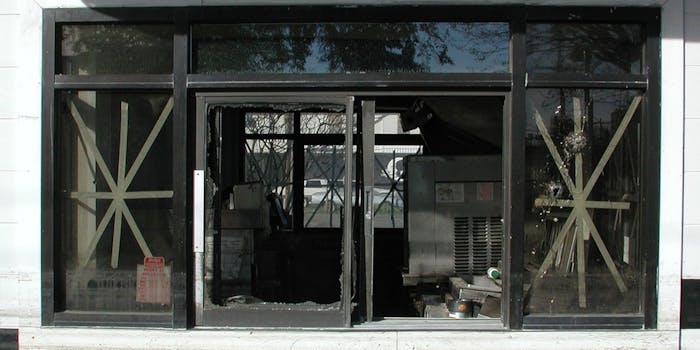 Much of what we know about the earliest human cultures comes not from the works of art they left behind on the walls of caves, or the fossilized fascinations around their campfires, but from their dead. Then, as now, humans struggled with death and mourned their dead through a prescribed series of rituals, believing that this was a fundamental part of the grieving process and that without these steps, their loved ones would not pass on to a greater world beyond. Today, the process of grieving has been greatly abbreviated, shortened, and turned almost into a parody of itself, and the digital realm bears a great deal of responsibility for it.

In Saginaw, Michigan, a funeral home just started offering drive-thru viewing services, allowing mourners to pull up, view the dead for three minutes exactly, and then pull away. If you find the concept rather appalling, it’s far from the only funeral home in the U.S. that offers such services to attendees. In Compton, California, one funeral home offers not just drive-through viewing, but bulletproof glass for the protection of the deceased.

This isn’t a new trend, either: A funeral home in Chicago started offering remote viewing via cameras in 1989 (the facility has since stopped offering this service due to vandalism).

Numerous funeral homes offer live streaming events for friends and family who cannot attend the ceremony. Recently, Michael Brown’s funeral was livestreamed in a defiant act, allowing the entire nation to view the slain teen’s funeral—and not everyone was comfortable with that:

I feel really weird when a funeral is live streamed or broadcast on television, especially if this is the family’s one and only ceremony.

(Though, notably, it was his family who opened the event to the public and it is their wishes, one presumes, that are more important to consider when discussing the appropriateness of the decision.)

These modern funeral conveniences—because this is what they’re cast as—remind me of nothing quite so much as Jessica Mitford’s landmark The American Way of Death, a fascinating, yet horrific, expose into the American funeral industry. Published in the 1960s and updated in the 1990s (shortly before Mitford’s own death), the book highlighted the hypocrisies of the industry and traced the history of profiteering innovations from U.S. funeral home directors and firms.

While events like viewings, showerings of flowers, caskets in excess of $10,000, embalming, and more—including the use of a funeral home rather than handling the body at home—may be taken as par for the course in the U.S. now, that wasn’t always the case. The funeral industry sold us these things and has continued to come up with more fees and expenses to add to the proceedings, taking advantage of family members in their time of grief. Critically, much like managers at fast food restaurants, they’ve also participated in the growing push against grief, treating death and funerals like events that should be managed as quickly as possible, add fries to your order for $1 extra.

Thanks to developments in medicine and the prizing of life at all costs over comfort and dignified death, the process of dying has become something slow, painful, and elongated that takes place silently behind closed doors, while the American way of death has become something brief, flashy, and finalistic—take your allotted personal day and bounce back. The idea of a drive-through visitation rather encapsulates the approach to grief and mourning in the U.S., a country where people are made very uncomfortable by the thought of extended grief.

In a conversation about their grief-related memoirs, Meghan O’Rourke and Joyce Carol Oates both spoke about writing as a way of processing grief, but also to the unexpected complexities of mourning. O’Rourke was startled by the fact that her grief didn’t shut off like a tap after the prescribed amount of time:

It’s been two years since my mother died. I—like my entire family, I think—am certainly less in grief’s grips than I was a year ago. But it’s not gone. I’m changed by it, the way a tree is changed by having to grow around an obstacle. Every now and then I see article by journalists or scientists who say studies show grief should pass in ‘six months’ or what have you. But loss isn’t science; it’s a human reckoning. In my case, it means I have to reckon every day with my mother’s absence, and what it has meant for my father and my two brothers (one of whom was 30 and the other 21 when she died).

Yes, there is a strange sort of expectation that grief should conform to a general pattern or principle. There are even scientific polls of measurement—what is ‘normal’—what is ‘extreme’ grief. As if individuals are not radically different, and as if even the course of a common disease, like cancer, will not manifest itself differently in different individuals.

In one of her most famous columns, Dear Sugar gave heartwrenching advice to a man struggling with the loss of his son:

Grief does not always have to be personal to strike out of the blue, and it doesn’t have to be recent, either. In 2012, obituaries editor Harry de Quetteville wrote about the delicate nature of his job, and he added a particularly poignant memory:

There is the ever-present possibility of opening the filing cabinet in anticipation of pulling out a perfect piece on a major star, only to find a truncated, moth-eaten scrap beginning something like: ‘Laurence Olivier, who has NOT DIED aged XX, was a promising young actor and delighted critics…with his performance in Noël Coward’s Private Lives…’ It makes you want to weep, but no matter how prepared we try to be, there are always moments when we get caught out and scramble to recover.

Grief is not something that can be easily cleaned, erased, tidied away by dinnertime, and everyone’s experiences of grief are different. The idea of the drive-thru viewing is strangely alienating, suggesting that it is possible for mourners to make quick work of their responsibilities, as though grief is about giving a nod to the dead and the family and then moving on, like clicking “like” on a Facebook status update about a dead friend or posting a #ThrowbackThursday on Instagram when someone passes.

Drive-through mourning, funeral directors say, is helpful for people who are afraid of entering funeral homes, but it’s something else, too: It’s a way to conveniently package grief, just like a livestream or an online memorial that will slowly fall away into pixels once people lose interest.

Yet, grief, which is one of the most intense and enduring emotions humans can experience, tends to defy boundaries. Is it really advisable to tell people that mourning can be accomplished through glass in three minutes, followed by a swipe of the pen on a guestbook?