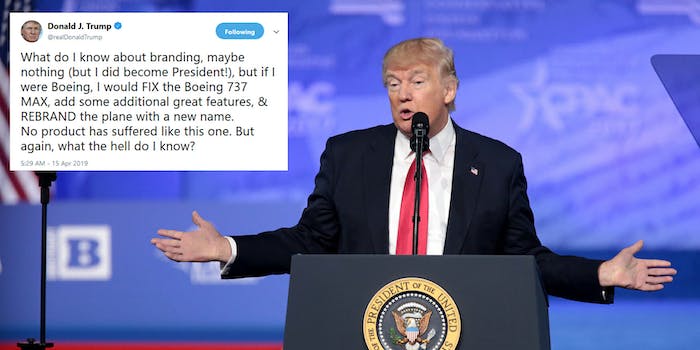 The suggestion caught the attention of people online.

“What do I know about branding, maybe nothing (but I did become President!), but if I were Boeing, I would FIX the Boeing 737 MAX, add some additional great features, & REBRAND the plane with a new name. No product has suffered like this one. But again, what the hell do I know?” the president tweeted.

What do I know about branding, maybe nothing (but I did become President!), but if I were Boeing, I would FIX the Boeing 737 MAX, add some additional great features, & REBRAND the plane with a new name.
No product has suffered like this one. But again, what the hell do I know?

Trump’s “fix” likely refers to the anti-stalling software on the Boeing 737 Max 8 planes that investigators reportedly believe did not work after an Ethiopian Airlines crash in March. That crash drew connections to a separate Lion Air crash in October last year.

All Boeing 737 Max planes have been grounded since the crash in March.

Around the same time of the crash, the president also weighed in, calling airplanes “too complex to fly.”

“Airplanes are becoming far too complex to fly. Pilots are no longer needed, but rather computer scientists from MIT. I see it all the time in many products. Always seeking to go one unnecessary step further, when often old and simpler is far better. Split second decisions are….,” Trump wrote in a series of tweets at the time. “….needed, and the complexity creates danger. All of this for great cost yet very little gain. I don’t know about you, but I don’t want Albert Einstein to be my pilot. I want great flying professionals that are allowed to easily and quickly take control of a plane!”

However, the president’s “rebrand” plan was met with mockery online.

"why don't they build the whole plane out of the black box" – the president https://t.co/1pQPkRUDTZ

Wow…. rename a machine that was defective and killed a bunch of people. Typical Trump…. lives don't matter….just dollars. Maybe Trumps should make that plan Airforce One as next maketing ploy. https://t.co/o0T0KMna7U

Of all the others, this is maybe the ultimate Trump tweet. Add some new gold doors, rebrand it and good to go! also "no product has suffered like this one". https://t.co/2WmulTOe5d

I now present to you brand new Boeing 737-Mega-Ass-Kicker-Supreme! (MAKS for short) Now with new features such as In-flight seating, mandatory dual AOA vanes and state of the art breathable air technology! This is the bigliest & only airplane we have ever rebranded! Thanks DT! https://t.co/5FxX8h8nCh

Trump’s own attempt to build a branded airline, Trump Shuttle, ran out of money in 1990, just two years after he began the endeavor.

The Trump administration was also initially criticized for its refusal to ground the Boeing plane, even as other nations responded swiftly to the two crashes.