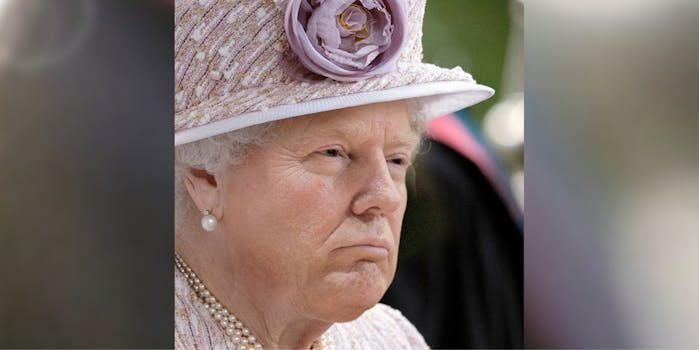 Of all the tactics available to Donald Trump’s opponents, satire has been the least effective. His own words and appearance are already absurd, and they’re part of his appeal. To his supporters, anyone mocking him must be weak and envious. It doesn’t work. On the other hand, here’s an entire Instagram account of Donald Trump’s face Photoshopped onto the Queen of England.

The thrust of commentary isn’t entirely clear: Trump is old and wrinkled? Trump is more monarchist than Republican? Trump is a figurehead with little actual influence? Trump is small and feminine?

Perhaps it’s that last one that’s most effective. Not because there’s anything wrong with femininity, but because Trump’s the sort of guy who would find such insinuations insulting. His vanity is well-known, as is his lack of respect for women, so implying that he’s aging like a literal “old queen” might just get at him.