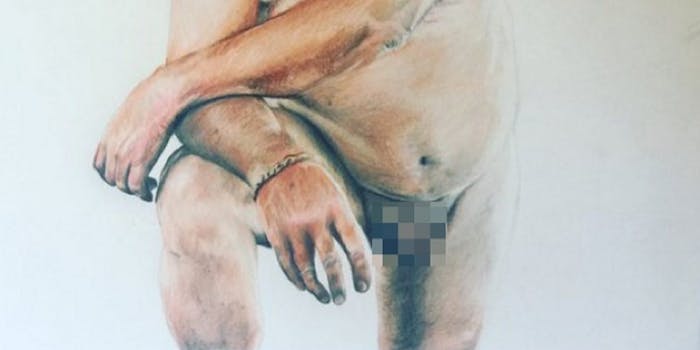 The odds are good, and the goods are odd.

Donald Trump made the size of his penis a matter of public interest when he guaranteed at a GOP debate that he has “no problem” in that area. But despite calls to prove his claim, Trump has released no evidence as to what he’s packing. The American people demand to know: How big is Trump’s dick? If Trump won’t say, then the public will just have to bet on it.

Irish sports wagering site Paddy Power, known for its fanciful prop bets, has assigned odds to the various potential measurements of Trump’s “Little Marco,” with the smart money placing it at between 6 and 8 inches. 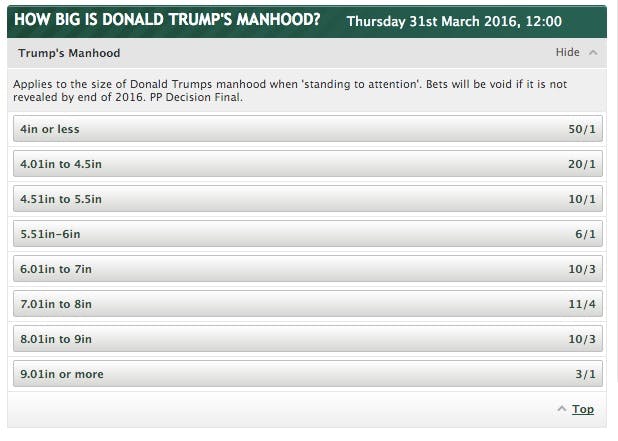 The basis for these numbers is unclear, but it doesn’t appear to be statistical. The best odds are on a 7-incher, but that would put The Donald in the 98th percentile for men. Statistically speaking, he’d be “yuge.”

Does Paddy Power have some evidence to suggest Trump is well-endowed? The betting house has yet to respond to request for comment on that score. The Daily Dot’s attempts to get more information about the GOP frontrunner’s GOPenis by contacting his former lovers, meanwhile, ended with no comment, and the Trump campaign itself has not released a statement.

Meanwhile, Paddy Power’s prop bet is open through the end of the month. If the length of Trump’s penis isn’t revealed by the end of 2016, all bets will be void.

Update 5:50pm CT, March 16: Paddy Power had this to say on the subject of their dick math:

“Unfortunately we have very little insight into what lies beneath trump’s drawers. The odds are leaning towards an above average manhood due to Trump being 6’1″. It’s not much but it’s the only indicator we have bar his own word, which we’re not taking on face value.”

They’re right: Vertical stature isn’t much to go on. As researchers put it in the study linked above, “there was no strong evidence to link penis size to other physical features such as height, body mass index, or even shoe size.”

All the more reason for Trump to whip it out and settle these bets.