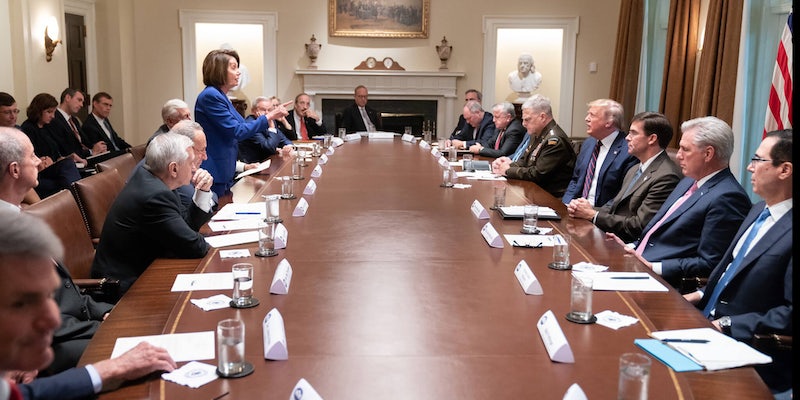 President Donald Trump on Wednesday tried to mock House Speaker Rep. Nancy Pelosi (D-Calif.) by tweeting out a photo of what was reportedly a very contentious meeting at the White House, saying she had a “meltdown.”

However, the attempt at mocking may not have had the desired effect Trump was hoping for—as the photo quickly drew thousands of people to praise Pelosi for standing up to the president.

The meeting, according to the New York Times, began as an update on the situation in Syria but quickly devolved into name-calling. Depending on who recounted the meeting, the name-calling led to people storming out.

Following the meeting, Trump tweeted that Pelosi had a “meltdown” (attaching the photo) and that the Democrats “stormed out of the Cabinet room.”

Meanwhile, according to the Times, Senate Minority Leader Chuck Schumer (D-N.Y.) said the president called Pelosi a “third-rate” politician and that Trump said he “didn’t want this meeting.”

Trump’s photo—which shows Pelosi standing up and pointing at Trump as members of the administration and several lawmakers sit at a table (some of whom have their heads down)—caught steam online, with people praising Pelosi.

Others pointed out Trump’s tweet may not be showing what he hoped it did.

that's what you think

What I see in this picture is one woman standing tall in front of a sea of men. And doing a better job at it than all of them. Queen. https://t.co/oF0M3iF34s

what a visual. Pelosi appears to be the only woman at the table.

just before this moment, Trump called her a "third rate" politician. https://t.co/kYGPcbtVYn

A photo for the ages. The most powerful woman in America standing up for our betrayed allies, while all the president's men sit in cowardly complicity.

He tweeted a photo of his own weakness. https://t.co/7ZCHT2gzZR

Oh dummy, you should delete this. She is getting you told and your buds are hanging their heads in shame. https://t.co/Z0KXnN56ko

A guy who claims to be a genius in branding just gave us an iconic official White House picture of Speaker Pelosi standing up to him. For the first time in far too long a time, thank you, Mr. President.

Then there was this.

Which is probably not something someone would do if they had a “meltdown.”