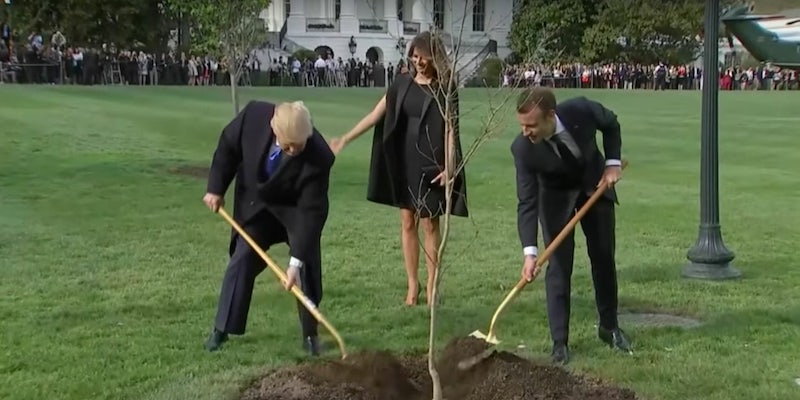 Macron presented the tree during his visit to the U.S. as a reminder of the “ties that bind” Americans to the French, Macron tweeted. The tree comes from Belleau Wood, the site of a battle in World War I where “more than 9,000 American soldiers died,” according to the Hill.

Videos and photos show Trump and Macron shoveling dirt on the already partially-planted tree on the South Lawn of the White House as their wives, Melania and Brigitte, watch.

100 years ago, American soldiers fought in France, in Belleau to defend our freedom. This oak tree (my gift to @realDonaldTrump) will be a reminder at the White House of these ties that bind us. pic.twitter.com/AUdVncaKRN

The scene has already become wildly popular on Twitter.

Maybe the bulk of the image’s comedy stems from the extravagant outfits of the couples. Maybe it’s the image of Trump doing some good old yard work. Maybe it’s the way the first lady is standing. We can speculate, but what we know for sure is that the scene is fertile meme material.

The photo has undeniable cinematic qualities.

which pink floyd album is this pic.twitter.com/a0uQx6rsNp

The new Sopranos season is the best pic.twitter.com/IAgj3gLvm3

This totally looks like the promo picture for a new Netflix series. https://t.co/tq26v07DuF

Some theorists on Twitter said the tree could have been Macron’s way to troll Trump for opposing the Paris Climate Accord, BuzzFeed reported.

Macron bringing Trump a tree as a gift is the PERFECT way to troll him over leaving the Paris Climate Agreement. pic.twitter.com/GhfRDgBTIy

Regardless of Macron’s intentions with his gift, the picture makes a pretty good meme. Or album cover. Or Netflix ad. Or whatever.