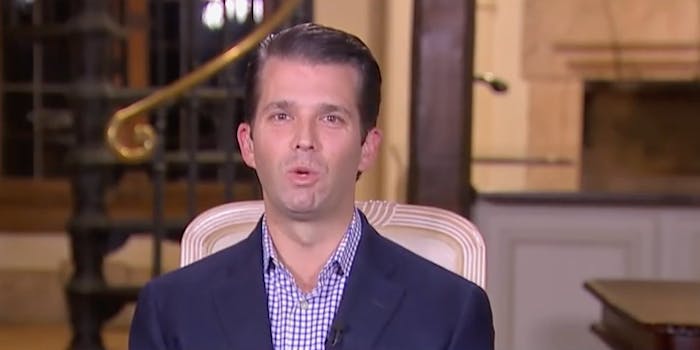 Donald Trump Jr. had the audacity to compare himself to Salt Bae

In case you are wondering, he is not Salt Bae.

The internet has found a number of reasons to skewer Donald Trump Jr., son of President Donald J. Trump—his infamous “Skittles” tweet about refugees, his big-game hunting habit, his posts on online message boards—but the improbable thing that finally made him a meme is being extremely bad at sitting. And, because he is a Trump, he had to respond to it.

Death and Taxes writer Jordan Freiman’s tweet featuring a triptych of awkward, seated photos of Trump Jr. went viral on Saturday, with many agreeing that Don the Younger’s sitting skills leave much to be desired.

Honestly am not surprised that DJT Jr. is the asshole kid from The Giving Tree. pic.twitter.com/42Th8ibbhz

Donald Trump Jr. looks like a scarecrow that a bank leaves on a foreclosed farm. pic.twitter.com/1Udvbc02dQ

By Sunday night, Trump Jr. had become aware he was being roasted, and decided to respond in classic “I’m not mad, I’m actually laughing” internet fashion. On Instagram, under a screenshot of Freiman’s tweet, he wrote, “Apparently I’m really bad at sitting?!?! Based on the memes out there I now know what it feels like to be Salt Bae! Thanks internet… And in all honesty if a couple bad pics is all you’ve got I’m pretty psyched.”

Apparently I'm really bad at sitting?!?! Based on the memes out there I now know what it feels like to be Salt Bae! Thanks internet… And in all honesty if a couple bad pics is all you've got I'm pretty psyched. #tryharder #saltbae #trump #haters #hatersgonnahate

Comparing yourself to Salt Bae, the sexiest meme star of the year? Donnie, please. The salt is real, but none of it is being sprinkled on a fine slab of Turkish steak.

Granted, it must feel bad to be in the public eye as a result of your very controversial dad’s love affair with wealth and fame—in the same New York Times piece featuring the “bad sitting” photo, Trump Jr. openly dreams about wishing himself away and moving out West—but the only way to win the internet’s game is not to play. No response to Twitter flaming can ever be a good one, and the only thing worse than trying to convince everyone you’re not mad is to do it by being mad and nude.

Please, Don Jr., do not go down the dark path to mad and nude.