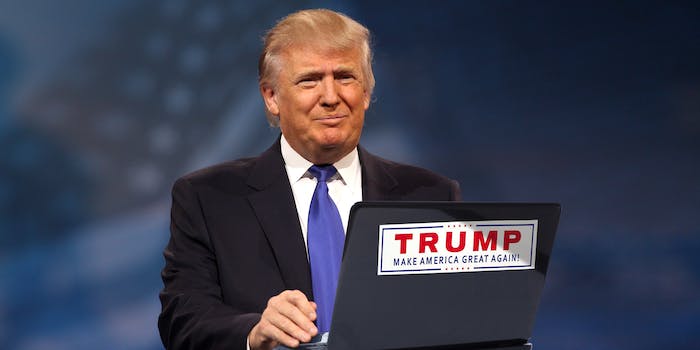 At least there's one thing he has some foresight on.

It is damn near impossible to protect your brand in the internet age. Pretty much anyone can sling slander for whatever reason they want, and there are very few rules in place to prevent those people from maliciously maligning you.

A CNN Money investigation, piggybacking on a Business Insider report from 2015, found that Donald Trump’s team has been all over the slanderous-domain-names front, purchasing 3,600 different URLs in the years he was a television personality and marketing impresario.

It’s instructive to look at which one were purchased. Think about you yourself doing it. If you’d never peed on a bird before in public before, it would never cross your mind to register YourNamePeedOnABirdInPublic.com to prevent someone from using it against you.

But after Trump began a multi-level marketing business a la those Shakeology people you see all over Facebook now, which many people claim are pyramid schemes, Trump registered the following domains: TrumpNetworkFraud.com, TrumpNetworkPyramidScheme.com, TrumpNetworkPonziScheme.com.

According to CNNMoney, since Trump started his campaign, his team registered 93 more domain names.

You can read more about CNN’s investigation here.