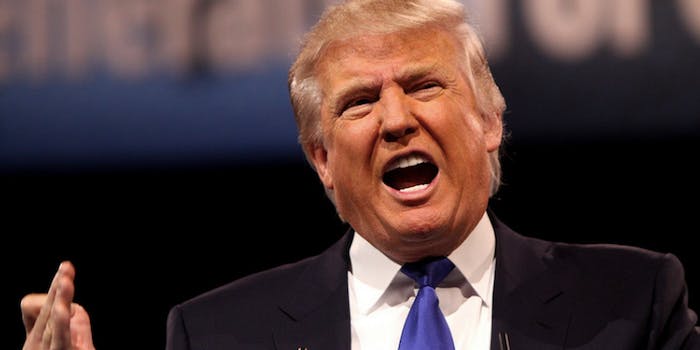 “Delete your account,” a good insult that was once the exclusive province of the type of person who ironically refers to the internet as “online,” went mainstream last week. The tipping point came when presidential candidate Hillary Clinton tweeted it at Looney Tunes hair-monster Donald J. Trump.

Now there’s an app that lets you automatically do the same in response to every single Trump tweet.

Made a small app to automatically tell @realDonaldTrump to delete his acount. If you're node savvy please run this https://t.co/hUzI5OFRzi

Use of Manny404’s “Delete Trump” tool requires knowing how to get your Twitter API credentials and start a NodeJS app, so there’s a small barrier to entry, but nothing a newbie can’t learn by Googling. It might be worth it if you want to pick a fight with Trump and his supporters, because once it’s up and running, you’ll automatically respond to each new Trump tweet with “[email protected] delete your account.”

Manny makes a pretty good case for his work as an example of code-as-protest:

~30 minutes of code => thousands of conservatives in their feelings. JavaScript used to just be a silly browser language

Of course, you also have to be prepared for your mentions to turn into a Fox News tire fire. Manny, for one, welcomes the challenge:

warning: your mentions will blow up