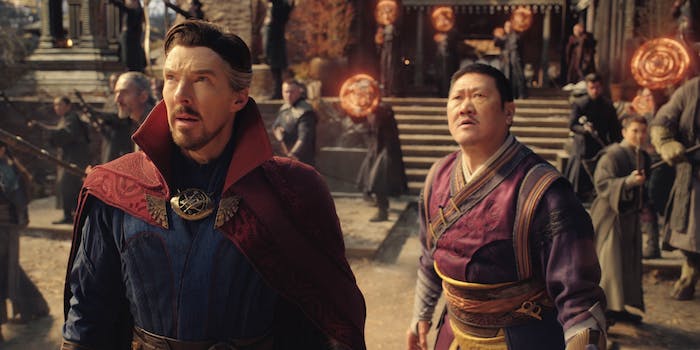 Should the movie have gotten a PG-13 rating?

People were divided about Doctor Strange in the Multiverse of Madness’ PG-13 rating (for  “intense sequences of violence and action, frightening images and some language”) before it arrived in theaters because it was the first horror movie in the MCU. But in the days since the film’s debut, that sentiment has grown even larger as it evolved into a discussion about whether Multiverse of Madness should have been rated PG-13 in the first place, a debate that only further highlighted the fickleness of movie ratings.

Part of that was sparked by a Variety column from Clayton Davis titled “What Spell Did Marvel Cast on the MPA for ‘Doctor Strange 2’ to Receive a PG-13 Rating?” that was published on Saturday. In the column, Davis looked back at some of the films that are designated PG-13 and what’s considered to be an R movie as well as the leniency that big studio movies tend to get with their films, which are usually aimed at the widest audiences possible.

“Studios have done their best to avoid R ratings for tentpoles, since limiting children and teens from entry results in fewer ticket sales,” Davis wrote. “Though the R-rated ‘Deadpool’ (2016) brought in more than $700 million at the box office, not many other directors were persuaded to bring darker, more vivid visions to their final cuts.”

In a taped segment, he also argued that Multiverse of Madness should’ve been rated R.

While far from the only person to highlight the amount of horror and gore in Multiverse of Madness, it became a sticking point.

People took to highlighting the levels of violence that are allowed in other PG-13 movies, showcasing even further just how inconsistent it is. Scenes from X-Men: First Class, Jurassic World, and Captain America: The First Avenger were among those cited.

Others pointed to a widespread collection of movies that featured a PG rating but included imagery scarier or more disturbing than what Multiverse of Madness had to offer—although those films were released prior to the first appearance of the PG-13 rating in 1984, so movies were either given PG or R ratings.

The debate over what makes a movie fitting for a certain rating will likely continue as more people watch Multiverse of Madness, but even if we did come to a consensus, it’s a reminder that ratings are inconsistent—even more so when it comes to the other factors often judged harshly by the MPA.