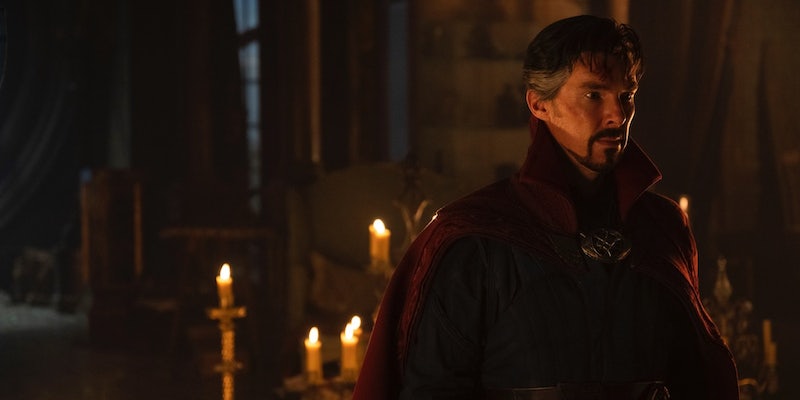 Doctor Strange in the Multiverse of Madness/Marvel

'Doctor Strange in the Multiverse of Madness' is the MCU's first horror-influenced movie. But can a PG-13 blockbuster really be scary?

It’s hardly shocking news when an MCU movie receives a PG-13 rating. They’re all PG-13! However, this announcement for Doctor Strange in the Multiverse of Madness is still ruffling some feathers in Marvel fandom, for a couple of reasons: The film’s reputation as the MCU’s “first horror movie,” and the involvement of director Sam Raimi.

Raimi is best known for two franchises: The original Spider-Man trilogy and the Evil Dead films, a decidedly gory horror-comedy series. When Marvel hired Raimi for the Doctor Strange sequel, this immediately provoked speculation about the film’s tone. Was Marvel finally going to release a scary movie?

The first Doctor Strange was directed by horror filmmaker Scott Derrickson (Sinister; The Exorcism of Emily Rose), but tonally it was standard MCU fare. Not a horror movie like Derrickson’s other work, nor as psychedelic as the comics. When Derrickson left the sequel over creative differences, there were widespread rumors that he wanted to go in a more extreme horror direction that Marvel wouldn’t accept.

Both Derrickson and Marvel denied this, saying the split wasn’t acrimonious, and that the studio actually wanted the next movie to be more horror-oriented. In the words of MCU producer Kevin Feige, “The intention was that Strange would guide us into a much creepier side of the world.” Then Raimi was hired, representing a perfect crossover point between Marvel’s Hollywood legacy and classic horror. With this week’s PG-13 rating announcement, fans are now arguing about how creepy this film can possibly be—with guidance from Raimi’s back-catalog.

Some Marvel fans are frustrated by Doctor Strange 2‘s PG-13 rating, either taking it as a sign that the film won’t be scary, or complaining about Disney‘s unwillingness to make adult-rated comic book movies like Joker and Logan. However, Sam Raimi does have a proven track record with PG-13 horror, with many people citing his 2009 film Drag Me To Hell. Evolving from the low-fi gore of the Evil Dead franchise, this glossy Hollywood horror flick is full of memorably gross and disturbing scenes—while still retaining the same rating as Spider-Man.

Of course, MPAA ratings are a pretty simplistic way of viewing a film’s “adult” qualities. An R rating is typically defined by sex, violence, and obscene language. Plenty of scary, impactful horror movies are “clean” enough to warrant a lower rating.

In the case of Doctor Strange 2, the real question is how much this is a Sam Raimi project versus an MCU spinoff. In addition to following a strict action-comedy formula, the MCU films tend to share a similar visual style. Relatively few directors (Taika Waititi; Joe Johnston; Chloé Zhao) have really left their mark as individual storytellers, and there are obviously concerns that Sam Raimi’s weirdness will be subsumed by Disney franchise branding.

The hope here is that Raimi can combine his blockbuster skills with some Drag Me To Hell creepiness without alienating the House of Mouse, with fans highlighting scenes from the trailer like Zombie Doctor Strange.