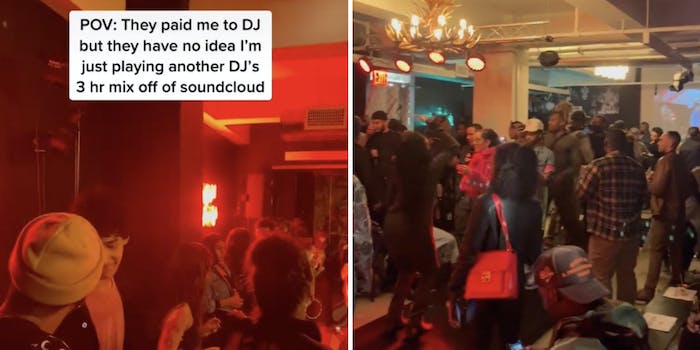 'Real or not. Doing this is disrespectful to the whole purpose of DJing.'

A DJ shared on TikTok that he used another DJ’s three-hour SoundCloud mix rather than mix live during a paid gig.

The TikToker (@flash.gea) has about 15,500 followers on the social media platform and calls himself “Young DJ/Rave Father from the Bronx” in his bio.

His video features a large number of people dancing at a party with the on-screen text, “POV they paid me to DJ, but they have no idea I’m just playing another DJ’s 3 hr mix off of soundcloud.”

“Wait… you expected me to mix live and risk messing up the set??” the video’s caption read. As of Monday, the video has about 1.3 million views and sparked a debate among viewers.

@flash.gea Wait… you expected me to mix live and risk messing up the set?? #fyp #fypシ #dj #nyc ♬ Liverpool Street In The Rain – Mall Grab

The video may have been a joke, based on a comment exchange between one viewer and the DJ.

“That serrato is just a youtube vid you pull up to make it look like u are lmao,” one viewer commented on the video.

Joke or not, however, some viewers didn’t see a problem with the DJ possibly using another DJ’s SoundCloud mix. Some cracked their own jokes about the situation.

“You better have that ad free version lmao,” one viewer quipped.

“‘Sorry no song requests!'” another viewer commented, imitating the DJ.

Other DJs on TikTok expressed their disapproval with the tactic.

“This is starting to hit real DJs (algorithms) and we are not happy,” one DJ and TikTok user wrote.

“Real or not. Doing this is disrespectful to the whole purpose of djing, it’s stealing someone else’s hard work and art and claiming it as your own,” another user said.

Some viewers wondered what the DJ was actually doing if he wasn’t mixing live during the gig.

“So do you stand there and pretend? Or? cause i can just imagine this LMAOOO,” one viewer said.

The Daily Dot reached out to user @flash.gea via TikTok comment.