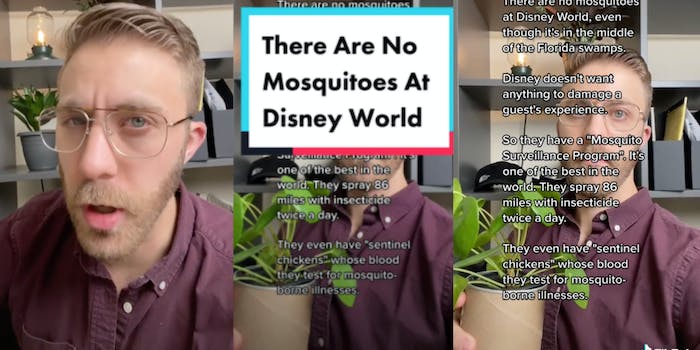 'Disney doesn’t want anything to damage a guest’s experience.'

For all of the wonders that Disney World might offer for its visitors, the allegedly utter lack of mosquitoes might be among its biggest. But as one TikToker put it, Disney makes an extensive effort to make sure its theme park stays that way.

On TikTok, Michael McBride, who posts under the username @idea.soup, shares “fun facts to help you sound smart at parties” to his more than 755,000 followers. One of his latest videos features McBride holding a plant as a wall of text appears over it. Unlike some of his other videos, McBride doesn’t narrate the video and lets the text speak for itself.

“There are no mosquitoes at Disney World, even though it’s in the middle of the Florida swamps,” he wrote. “Disney doesn’t want anything to damage a guest’s experience. So they have a ‘Mosquito Surveillance Program’. It’s one of the best in the world. They spray 86 miles with insecticide twice a day. They even have ‘sentinel chickens’ whose blood they test for mosquito-borne illnesses.”

Just how valid is that claim? On its official FAQ page, Disney World confirms that it does have a program in place to address mosquitoes.

“We have an extensive mosquito prevention and monitoring program across property,” it states but doesn’t elaborate what that means.

A 2018 YouTube video uploaded to Midway to Main Street’s channel corroborates McBride’s TikTok but goes into more detail about Disney World’s mosquito control methods. In one regard, Disney employees use carbon dioxide traps to capture bugs. It also monitors its sentinel chickens around the parks to spot diseases—and gives Disney an idea of where the bugs are located.

A 2019 article from Inside the Magic pointed toward the efforts by William E. Potter, who helped build Disney World. Potter, a retired Army major general who was once governor of the Panama Canal Zone and an engineer, used drainage systems to remove all instances of stagnant water in Disney World, which mosquitoes need to lay eggs. A garlic spray is also used as an insecticide.

But for Disney World, controlling the mosquito population isn’t just a matter of people’s comfort, although it probably helps. It’s also trying to prevent the spread of disease transmitted by mosquitoes in parks that are visited by millions of people every year. (On Disney World’s FAQ page about mosquito control, a related question is about the Zika virus, a disease that can be spread through mosquitoes.)

As for people’s personal experience? Commenters are mixed with some detractors highlighting how Disney’s quest to quell mosquitoes from its premises is harmful to the environment. Some also noted that, despite Disney’s best efforts to control mosquitoes in the area, they still managed to get bit by mosquitoes and other bugs while at Disney World. But others are grateful that at least in Disney World, they can go without having to worry about being attacked by mosquitoes.