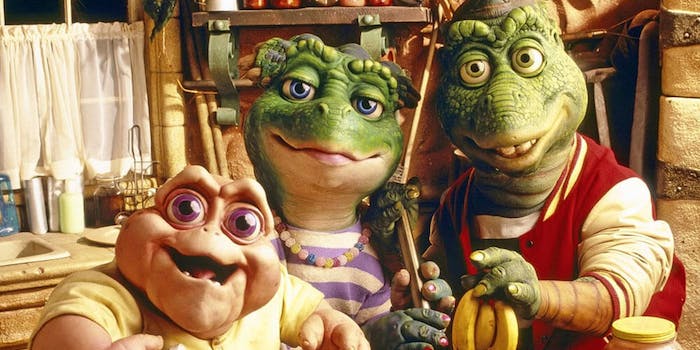 'One day you're eating fruit and cucumber and the next you're extinct...'

London-based singer-songwriter Tom Rosenthal shared a song written by his young daughter on Twitter this week, and it would seem safe to say that talent runs in the family. That is, if the ensuing reception to the aptly-titled tune called “Dinosaurs in Love” is any indication, anyway.

“Fenn, my nearly four year old daughter, recorded her first ever solo song today,” Rosenthal tweeted on Tuesday. “She came up with all the words herself and I helped her a little bit with the tune. It’s called ‘Dinosaurs in Love.'”

As if a song called “Dinosaurs in Love” written and performed by basically a freaking toddler couldn’t get any cuter, Fenn’s adorable British accent definitely puts it over the top.

“Dinosaurs eating people,” she starts out by singing—and we’ll forgive her lack of knowledge that dinosaurs did not, in fact, inhabit the earth at the same time as people, on account of her being not even four-years-old and all.

“Dinosaurs in love,” Fenn goes on to sing. “Dinosaurs having a party / They eat fruit and cucumber / They fell in love / They say thank you.”

Now that’s sweet. Very, very sweet. Yes? But then shit gets dark. Like, the ending to the 1991-1994 ABC Jim Henson sitcom Dinosaurs, dark.

“A big bang came and they died,” she continues to sing, concluding that the “dinosaurs fell in love” but “didn’t say goodbye.”

Jesus, Fenn! Morbid ending notwithstanding, Fenn’s song clearly resonated and went on to capture the hearts of the internet. “Now I want to cry. The dinosaurs fell in love and they didn’t get to say goodbye,” wrote Twitter user @YasminYonis.

Now I want to cry. The dinosaurs fell in love and they didn’t get to say goodbye https://t.co/irVLL1mBeu pic.twitter.com/Ke9bucgzUd

“This is my favorite song and artist of the decade,” tweeted actress Heather Matarazzo.

This is my favorite song and artist of the decade. https://t.co/ajpcdRl3xb

Others found similar poignancy in “Dinosaurs in Love.”

One day it’s fruit and cucumbers the next day it’s falling in love without the chance to say goodbye…. https://t.co/zZLd28VzQ4

Please play this at my wedding. https://t.co/DXslI7bOtP

But they didn’t say goodby- pic.twitter.com/YnG0FwlhMT

we're not crying you're crying https://t.co/tIzEtmCmmq

One day you're eating fruit and cucumber and the next you're extinct. Rough times

“I just let them go wild with whatever is happening,” Rosenthal later told CNN, who is also father to a six-year-old named Bess who often composes melodies with her sister, such as previous songs called “Tigers in the Forest,” “Zebras in the Zoo,” and “Elephants Have a Little Nap.”

Rosenthal added that he wasn’t that surprised that the song went viral due to the fact that “Dinosaurs in Love” is so “evocative.” Adele had better watch her back, is all we can say.