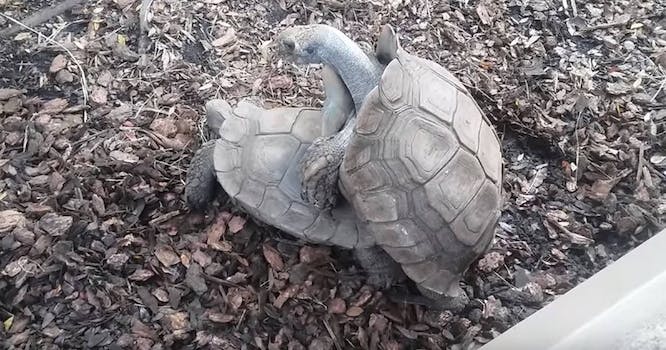 In praise of Diego, the Galapagos F**k Tortoise.

Diego, a Galapagos tortoise whose sexual prowess has saved his entire species, has been praised effusively in dozens of news articles today. The internet is just discovering the good sex reptile, and already he is a big hero.

The big sexual boy, at 175 pounds and 5 feet tall (when he stretches his neck), proved to be up to the task. To date, he has fathered 800 offspring—that’s roughly 40 percent of the current Chelonoidis hoodensis population.

He currently “shares his enclosure with six females,” according to the AFP.

The reaction to the virile he-tortoise has been positively gushing. Diego is the new meme. Matt Christman, one of the hosts of the Chapo Trap House podcast, summed up the whole thing with this series of tweets.

"Ugh. I've been meetings since lunch. How was your day, dear?"

"I found out about a tortoise who fucks a lot."

Why don't they build all the endangered species out of the fuck tortoise?

But Diego is not just a niche Weird Twitter star. He is the badass new sex god of all online. Please enjoy these blurbs about how cool the shell-encased sex enjoyer is.

Who the fuck cares about harambe when you have a sex mad tortoise https://t.co/ScAzbfWNwf

if you won't fuck the fuck tortoise, you are not woke on issues of biodiversity

That tortoise's sole responsibility in life was to fuck and save his species. And he accomplished it. Bless him.

Tortoise had so much sex that he "saved his entire species." This is what a hero looks like. https://t.co/KgKX3HTN40 pic.twitter.com/VWHgjSFCue