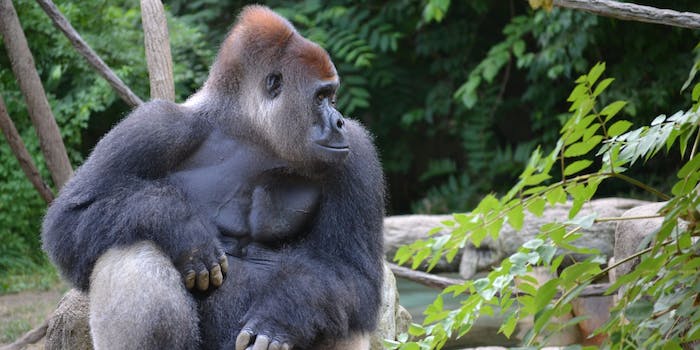 Ask not what Harambe can do for you, but what you can do for Harambe.

It’s the question Australians asked themselves as they hit the polls on Saturday in what the Guardian reports was the longest federal election campaign since the 1960s. Voters added Harambe to the enormous list of things and people to vote for this election, taking Harambe’s legacy to polling stations around the country.

The killing of Harambe the gorilla at the Cincinnati Zoo after a 4-year-old fell into his cage sparked national outcry among Facebook‘s most outspoken internet commenters, and gave life to countless memes that mourned the 17-year-old primate while simultaneously commenting on the outrage culture clones that spread like bacteria on the internet.

Harambe, once just a gorilla nobody, has become a globally recognized phenom in memes. Although he died in May, his memory and likeness remain a dark punchline for people making light of serious issues and events.

you know who the real winner was here today? harambe (the gorilla who died) and his never-ending legacy #ausvotes

The further we get from Harambe’s death, the stronger his legacy becomes. He transcended the rage spirals of parents calling for children to be kept on leashes and thinkpieces wondering whether zoos are safe for animals or people. He’s become legendary in the dead animal annals of history, taking his rightful place alongside Cecil the Lion, who was poached by a dentist.

jobs, growth and justice for harambe (the gorilla who died) #ausvotes

Those handwritten votes and lovingly crafted illustrations will not render ballots trash. Actual votes will still count. In 2013, the Australian Electoral Commission confirmed via Twitter that drawing a dick pic, or any other doodle on a ballot, is considered formal as long as someone’s preferences are clearly visible.

In the U.S., however, rules might be different. While people write in candidates, (dead, alive, and imaginary) all the time, it’s unclear what the rules are regarding drawing on the ballot if it doesn’t obscure your preferences. The Daily Dot reached out to U.S. Election Assistance Committee officials seeking comment.

Once we get the go-ahead, it’s up to you to honor Harambe the best way you can come the general election. After all, Harambe was born in America and was just old enough to be eligible to run for president in gorilla years when he passed away.