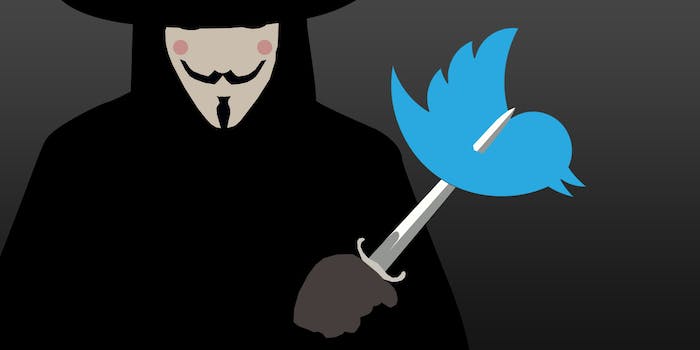 Denver police spar with Anonymous on Twitter after May 5 protest

"Your use of words like 'assault' and 'ambush' do not make them true."

Yet after a protest, organized by the Anonymous-affiliated group Every5th on May 5 in Denver, Colo., the officer in charge of the force’s Twitter account decided to do just that. Well, sort of.

While hardly the Socratic dialogues, Denver police responded to criticism from popular Anonymous Twitter account @YourAnonNews, which claimed that officers intimidated and assaulted protesters attending its march against “police repression.”

Here’s how the exchange began:

After the police agreed to talk, the following dialogue ensued:

@DenverPolice we are curious about why your officers are following people home from a peaceful protest and assaulting them in the street.

@YourAnonNews – we disagree with your characterization of the incident or actions of the officers.

@denverpolice on what grounds do you justify ambushing people as they leave a protest? Are you denying that officers followed protesters?

Denver police continued questioning the language of the protesters and to dead-bat the allegations of violence by insisting the police were ensuring—rather than breaching—public safety.

@denverpolice you didnt answer our question. You said you “disagree” with our “characterization of the incident” but didn’t provide your own

The debate went cold, however, after @YourAnonNews tweeted them a video of alleged police violence.

.@DenverPolice we would love to get your comments on the video we just tweeted which shows your officers as a threat to public safety.

While the video isn’t clear enough to determine what exactly is happening as the riot squad advances, eyewitness Alex Mullis, who posted the above video to Instagram, commented:

At one point the cops charged the crowd and tackled some people with flags/signs etc but stopped really fast cause of the reaction from everyone watching and filming. They pushed everyone back and threatened to arrest people who were standing on the street.

Hours after the Twitter confrontation began, @YourAnonNews posted another video of police confronting the crowd with batons, with one police officer hurtling at the protesters with his baton raised as onlookers screamed, “No!” and “What the fuck?!”

Although the moment when the officer meets the crowd is obstructed, the police have yet to clarify why the officer was approaching a peaceful protest with such zeal.