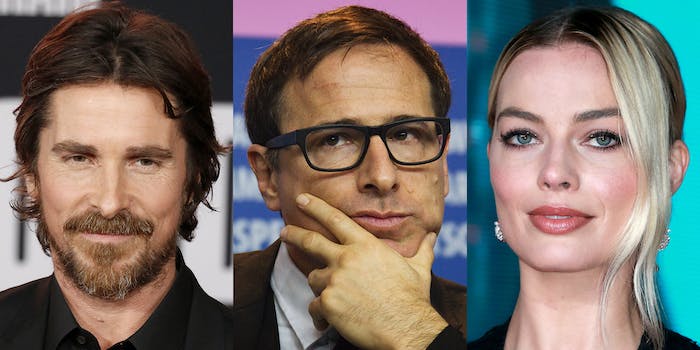 The director has a long history of abuse allegations, and Twitter users are reminding the internet.

Director David O. Russell is known for making prestigious films like Silver Linings Playbook and American Hustle, collaborating with numerous A-list actors. But he also has a long history of abuse allegations. These range from tales of physical violence and bullying toward stars like George Clooney and Amy Adams, to an allegation of sexual assault from his niece. Still, many beloved actors are lining up to appear in his next project.

Russell’s next film will star Margot Robbie, Taylor Swift, Anya Taylor-Joy, Christian Bale, John David Washington, and Rami Malek, among others. The movie’s title and concept haven’t been announced yet, but it’s an all-star cast for his first big project since 2015’s Joy, starring Jennifer Lawrence. As a result, people are starting to question why these actors are so keen to work with Russell, considering his well-publicized history of violence and abuse.

When filming American Hustle in 2013, Christian Bale reportedly had to step in and protect Amy Adams from Russell’s abuse. Speaking to GQ three years later, Adams said “I was really just devastated on set,” revealing that she cried “not every day, but most.” She described Russell’s filmmaking style as “mania,” saying that he developed a “wild, crazy way of working” on Silver Linings Playbook the year before. But similarly unpleasant stories existed long before Silver Linings Playbook. This kind of behavior has been reported throughout Russell’s career.

In a 2000 interview with Playboy (no longer available on Playboy‘s website), George Clooney went into detail about Russell’s violent and volatile attitude while filming the 1999 war movie Three Kings. Clooney said that Russell screamed at members of the crew, made people cry, and led an assistant director to quit mid-scene. Clooney describes repeated attempts to intervene and protect other people on set, including one time when Russell shoved an extra to the ground and kicked him. The conflicts culminated in Russell allegedly headbutting Clooney and grabbing him by the throat, at which point Clooney fought back. He said that working with Russell was “truly, without exception, the worst experience of my life.”

The New York Times reported in 2004 that Russell assaulted filmmaker Christopher Nolan at a crowded party. This was a seemingly one-sided dispute over Jude Law, who had turned down a role in Russell’s movie I Heart Huckabees and chosen to work with Nolan instead. Russell put Nolan in a headlock and demanded that he “show artistic solidarity” and “give up” Law. Soon after, Law agreed to be in I Heart Huckabees after all. The same article describes Russell “rubbing his body against the women and men on the set,” and slowly stripping off his clothes while directing a scene. I Heart Huckabees also led to a notorious video that’s resurfacing on Twitter today, showing Russell yelling abuse at actress Lily Tomlin:

Russell’s career slowed down after the Harvey Weinstein scandal, with Amazon scrapping plans for a $160 million series starring Julianne Moore and Robert De Niro in 2017. This was reportedly because Weinstein was a producer, not because of Russell’s own reputation. De Niro will now co-star in Russell’s next movie.

Russell’s history of abusive behavior is being touted as an example of Hollywood hypocrisy. Despite the past few years of public conversations about abuse in the film industry, Russell is still being hired to make high-profile movies. In particular, detractors online are highlighting the clash between Swift’s feminist advocacy and her choice to work with Russell. Apparently, Russell’s prestigious artistic reputation outweighs his well-documented history of violence and abuse.