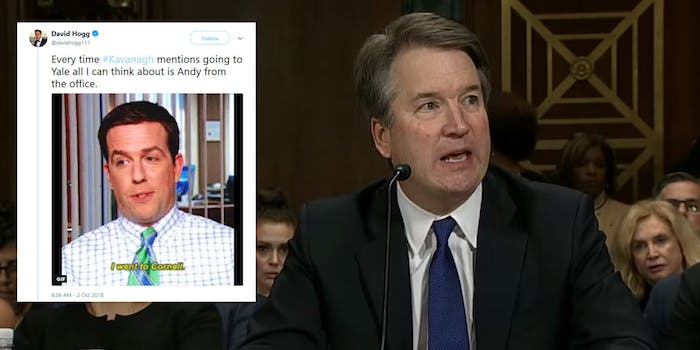 Other people had the same thought.

David Hogg, the outspoken survivor of the school shooting in Parkland, Florida earlier this year, mocked Supreme Court nominee Brett Kavanaugh on Tuesday by comparing him to a character from The Office.

Hogg took note of Kavanaugh’s continued mentioning of his education at Yale during his confirmation hearings, adding that it reminded him of Andy Bernard, a character in The Office who constantly talks about his college years at Cornell University.

“Every time #Kavanagh mentions going to Yale all I can think about is Andy from the office,” he wrote, adding a GIF of Andy Bernard saying “I went to Cornell.”

Hogg followed up the tweet by making fun of Kavanaugh’s angry testimony from last week where he denied allegations from Dr. Christine Blasey Ford that he sexually assaulted her while the two of them were in high school.

“Then there was his testimony,” he wrote, attaching a GIF of Andy Bernard punching his fist through the wall from an episode in the third season of the show.

Every time #Kavanagh mentions going to Yale all I can think about is Andy from the office. pic.twitter.com/puXSglhbJR

Then there was his testimony pic.twitter.com/Iuw9tBhKgq

During his hearing last week, Kavanaugh mentioned that he got into Yale numerous times in one line of questioning from Sen. Sheldon Whitehouse (D-R.I.).

“Senator, I was at the top of my class academically, busted my butt in school. Captain of the varsity basketball team. Got in Yale College. When I got into Yale College, got into Yale Law School. Worked my tail off,” he said.

Andy Bernard is a character that numerous people on Twitter have compared Kavanaugh to during his hearings, including a reference to the character’s drinking habits, which were a major point of questioning during Kavanaugh’s hearings.

Kavanaugh describing his frat boy past reminds me of Andy Bernard's experience at Cornell: pic.twitter.com/NOYd1IsbdN

Brett Kavanaugh is the living embodiment of if Andy Bernard didn’t work at Dunder Mifflin and instead became a Judge. pic.twitter.com/AtwlFt6buf

Would that make Donald Trump Michael?