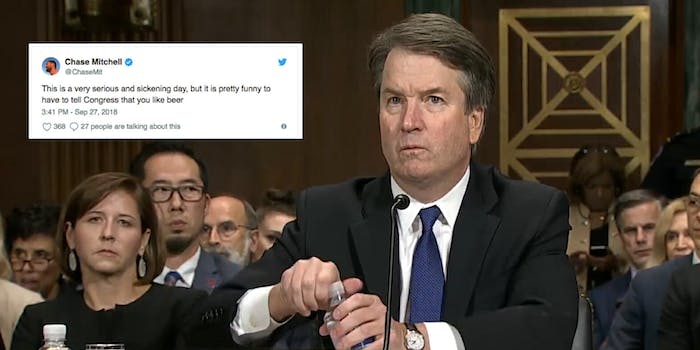 Judge Brett Kavanaugh liked beer when he was a high school student. In fact, he still likes beer. This seems to be one of his primary points while being interviewed to serve a lifetime appointment on the Supreme Court by the Senate Judiciary Committee, and Twitter is completely eviscerating his enraged ranting because of it.

Kavanaugh mentioned his appreciation for the yeasty beverage during his opening statement to the committee, nearly an hour after Christine Blasey Ford finished telling the committee about the evening she says he attempted to rape her when they were in high school.

“I liked beer. I still like beer, but I did not drink beer to the point of blacking out and I never sexually assaulted anyone,” Kavanaugh said. If everyone in high school who drank beer in this country was accused of sexual assault, Kavanaugh said, the country would be in a dark place.

Kavanaugh later went on to explain to Rachel Mitchell, the prosecutor questioning him and Ford for the committee’s Republicans, that him and his friends drank beer.

Kavanaugh’s explanation of how much he likes beer, versus his inability to have ever sexually assaulted someone, versus the audacity that everyone who drinks beer might be accused of sexual assault, was a clear attempt to show that he’s just a good ol’ boy who knows how to have a good time without losing his inhibitions and causing someone harm.

The thing is, no one is accusing Kavanaugh of assaulting Ford because he drinks beer. She says he assaulted her because that is what she remembers happening to her.

We are juxtaposing the testimony of a woman who went into studied, medical detail about how memory is formed in the brain and a man yelling ‘I LIKE BEER’.

I drank beer.
Sometimes I drank too much beer.
I liked beer.
I still like beer. #fratchant

How is this real life

Ain’t nobody accusing Brett Kavanaugh of being guilty of sexual assault because he drank beer.

This is a very serious and sickening day, but it is pretty funny to have to tell Congress that you like beer

But every kid who drank beer in high school hasn’t been accused of sexual assault. YOU have.

After Kavanaugh’s declared love of brewskis, and all of Ford’s testimony, the internet may need a beer itself.