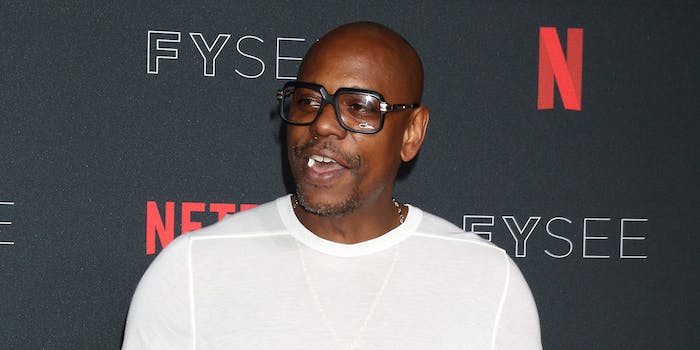 The performance took place at a nearby venue.

Dave Chappelle’s scheduled show at First Avenue—a long-running club in Minneapolis—was relocated to another venue in the city after both staff and patrons objected to him performing there due to his anti-trans jokes.

First Avenue announced the venue relocation on social media hours before Chappelle was to take the stage and alerted patrons that his show would no longer take place at its venue; the show would instead take place at the Varsity Theater, and customers’ First Avenue tickets would transfer over to the other theater. It acknowledged that some people might not agree with the decision and noted, “We believe in diverse voices and the freedom of artistic expression, but in honoring that, we lost sight of the impact this would have.”

“To staff, artists, and our community, we hear you and we are sorry,” the statement reads.”We know we must hold ourselves to the highest standards, and we know we let you down. We are not just a black box with people in it, and we understand that First Ave is not just a room, but meaningful beyond our walls.”

Chappelle’s set at First Avenue was first revealed on Monday and was immediately met with backlash. People called First Avenue out for being hypocritical about inviting Chappelle to perform after being among the places openly celebrating Pride Month. Chappelle’s material, such as his controversial Netflix comedy special The Closer and a recent surprise set during a John Mulaney show, have featured transphobic jokes. Netflix, which hosts many of Chappelle’s taped specials, has stood by him even after The Closer led to a walkout from staff.

As First Avenue employees told MPR News, many of the staff who work events at First Avenue in various roles are part of the LGBTQ+ community.

Some even pointed to the venue’s own Code of Conduct and argued that Chappelle shouldn’t be welcome because he openly violates it with his anti-trans sets. Listed under a section titled “The following behavior is not welcome at First Avenue venues” is the following: “Acting or speaking in a discriminatory manner or using racist, sexist, ableist, transphobic, homophobic, xenophobic, or other biased language, including intentional misgendering.”

Chappelle’s set at the Varsity Theater took place Wednesday night as expected. Before the show, the Minneapolis Star Tribune reported that about 50 protesters gathered outside the venue. During the show, Chappelle referred to the protesters as a “small group of transgender lunatics” (according to the Star Tribune‘s Neal Justin) and expressed hope that First Avenue would “be more courageous in the future.”