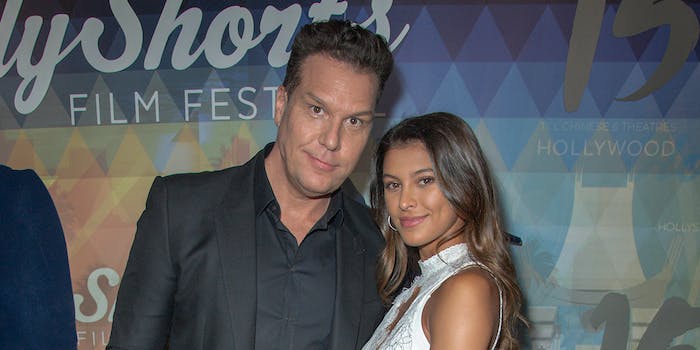 After five years of dating, Dane Cook is engaged to his girlfriend Kelsi Taylor, the couple revealed on Tuesday. And while the announcement arrived with gushing words about how it went down and several People exclusive photos, it’s being met online with a resurgence of discourse about their respective age difference that’s surrounded the couple for much of their relationship.

“I was asking my best friend, the woman who I’ve shared some of the greatest times of my life with, to marry me so we can start the next chapter our of lives together,” Cook told People. “I was also thinking of how absolutely stunning she looked.”

Taylor similarly gushed about Cook’s proposal, which took place on July 13, noting that “I couldn’t have asked for the moment to have been more perfect.”

Dane Cook, a comedian who’s also done some acting (for example, he was in the American Gods TV show), is 50. Taylor, a fitness instructor and singer, is 23; the couple began dating when Taylor was 18 and were “just friends” before that. The couple has a 27-year age gap between them, something that’s been brought to light more than once during the span of their five-year relationship. In the past, Cook has noted that their respective families didn’t have any issues with their relationship.

“The only thing you have to do is plan that your deaths will be somewhat far apart,” he told one fan in a 2018 Instagram Q&A when asked for advice about how to navigate a big age gap, according to Page Six.

As news of the engagement spread, people once again drew attention to the large age gap between the couple, as well as. The phrase “She’s 23” started trending on Twitter in reaction as people pointed out the potential issues with their relationship.

“i am SO SORRY to do age gap discourse today but idk imagine you’re a 45 year old man and you are friends with dane cook and dane cook is like ‘can my gf come hang out with us?’ and she’s fucking 18 years old. like. what do u talk about?” @starswheeled tweeted.

A tweet from Page Six about Cook and Taylor’s engagement described Taylor as Cook’s “longtime love” got particular notice for the euphemistic way it described a five-year relationship that began when Taylor was 18.

Cook is choosing to focus on the positives as he shared a video and photo montage of himself and Taylor celebrating their engagement.

“The love of my life is now my fiancé!” he tweeted. “To everyone sending us love and positive notes we appreciate it tremendously.”