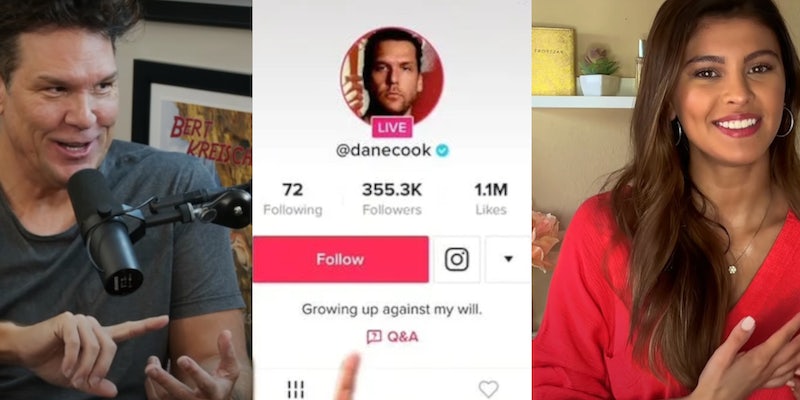 ‘Your girlfriend’s the one growing up against your will’: Dane Cook under fire after news he dated an 18-year-old resurfaces on TikTok

‘His jokes are no longer the worst thing about him!’

Comedian Dane Cook is once again under fire as TikTok users criticize the 50-year-old’s relationship with his girlfriend Kelsi Taylor, who started dating him 5 years ago when she was 18 years old. A TikToker reinvigorated controversy over the age gap while criticizing Cook’s TikTok bio, which says “growing up against my will.”

TikToker Nathaniel (@nathanielrosenberg), a creator who makes comedy videos, filmed himself reacting to a screenshot of Cook’s bio.

“Has anyone else noticed that since Dane Cook started dating a teenager, he’s been trying to act like he’s also a teenager? Like look at this. ‘Growing up against my will.’ What do you mean, ‘growing up’, you’re 50 years old! Your girlfriend’s the one growing up against your will,” the TikToker argues in the video.

Cook is a stand-up comedian and actor who rose to popularity in the 1990s and 2000s, although his acting career has petered out in recent years. Despite the drop in acting gigs, Cook has over 3.7 million followers across Twitter, Instagram, and TikTok.

Cook is no stranger to controversy—he’s been reportedly accused of stealing jokes from fellow comedians Louis C.K. and Joe Rogan, criticized as being unfunny by other famous comedians, and scrutinized for the age difference in his five-year-long relationship with Taylor.

Taylor is an actress, singer, fitness instructor, and influencer with over 37,000 followers on Instagram. Cook first spoke about his relationship with Taylor in 2017 on Instagram. In 2019, the couple publicly celebrated their two-year anniversary when Taylor was 20 years old, according to Us Weekly.

Five years into their relationship, TikTok has reinvigorated controversy and criticism over the couple’s age gap and how old Taylor was when they started dating.

“I’m sorry what??” one user asked in the comments section of the viral TikTok.

“Surprised? no. disappointed? also no. disgusted? yes,” another criticized.

“They started publicly dating when she was 18 and they were ‘friends’ before that,” Nathaniel, the creator of the TikTok, replied in the comments. “His jokes are no longer the worst thing about him!”

However, on the flip side, some users came to Cook and Taylor’s defense.

“I see what your trying to say about Dane Cook. But she as an adult and so is he. So why are you bent out shape over it?” one user commented.

In a message to the Daily Dot, Nathaniel described some of the defensive reactions to his video.

“I think the grossest, yet least surprising thing is that almost all the people defending him are other grown men. Or they’re anonymous. I can’t imagine why you’d go out of your way to defend a 45-year-old dating a high schooler but some guys are hellbent on doing so,” the TikToker said. “But it’s nice to see that people are more socially conscious now. For every weirdo comment defending him, there’s another ten criticizing him. I don’t know if that would be the case a few years ago.

A few users in the comments section of the viral TikTok accused Cook of grooming Taylor.

Grooming is a term used to describe abusive relationships in which an older person initiates a relationship with a child or young adult, using manipulative tactics to exploit and control them. According to the National Society for the Prevention of Cruelty to Children (NSPCC), some abusers may imitate the behavior of young people in order to gain trust.

“A groomer can use the same sites, games and apps as young people, spending time learning about a young person’s interests and use this to build a relationship with them,” the NSPCC states on its website.

Other famous comedians and actors like Leonardo DiCaprio, Zach Braff, and Jerry Seinfeld have faced accusations of grooming in recent years after dating much younger women in their teens or early twenties.

“Some of the comments pointed out that it’s standard grooming behavior to try to make yourself seem like a kid. I wasn’t expecting to open up a discussion but I’m glad my dumb joke could call out an unfortunately common power imbalance in Hollywood,” Nathaniel told the Daily Dot.

The Daily Dot reached out to representatives for Cook and Taylor listed on their respective IMDbPro pages.