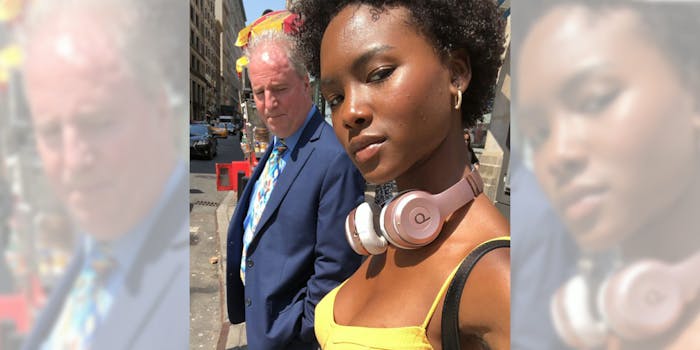 The dad claims he was just looking down.

Nothing like getting on Twitter to waste some time and see what hot new memes are circulating. Take, for instance, this picture of an older gentleman photobombing a young woman while she takes a selfie. One glance is all it takes to see how highly meme-able it is.

And Twitter had no problem rising to the challenge.

Lol 😂 He was checking out the scenery pic.twitter.com/WJoNqaMtOW

Now imagine logging on and discovering that latest viral sensation is your father.

You ever check twitter and realize your fucking father has turned into a meme? https://t.co/fcGn7JpdP2

People seemed to find that fact even funnier than the original post.

better not let your mama see this pic.twitter.com/bnvqYrO2bQ

Alex Leavey, 23, was shown the tweet by her sister’s fiancé, and she told BuzzFeed News that she found the whole situation pretty funny.

“I immediately knew it was my dad and was laughing at most of the replies to it,” she said “My dad has a really big personality so for people who know him it was so funny that of all people walking around in Manhattan of all places this picture was taken and he’s in it.”

Leavey also mentioned that her father, Dennis Leavey of Queens, NY, is blind in one eye so he wasn’t actually checking anybody out. She said she asked her father about the photo, and he said has no memory of the moment.

“Looking at the picture, he says he was just looking down!” she said.

Okay I’m gonna answer some questions! Yes he’s blind in one eye, the baby is a boy, and it’s a jerry Garcia tie I got him for Christmas. He knows but mom doesn’t so don’t tell her

She also added another picture of her father, apparently captured in the middle of an air guitar solo.

Just a disclaimer I love my dad very much and I think he’d like you to see his favorite picture of him pic.twitter.com/PD99RUtObO

Alex even interacted a bit with the original poster, and everyone seemed to agree that the situation was pretty amusing.

Unfortunately yes🙄 I am so sorry lol

Although a few people skipped through all the buzz and focused on what was really important.