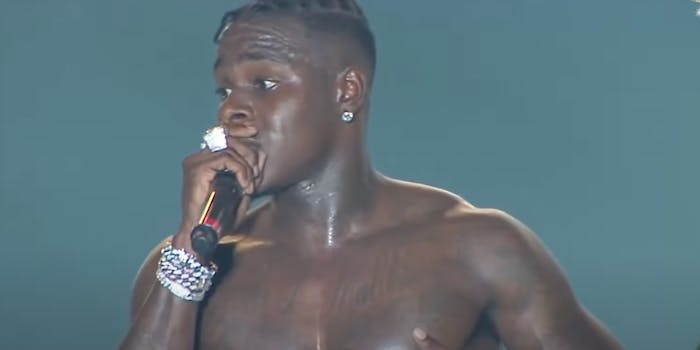 The rapper was slated to perform at the festival tonight.

It appears DaBaby is facing the consequences of his homophobic rant at last weekend’s Rolling Loud music festival in Miami. Lollapalooza announced that the rapper, who was originally slated to perform at the Chicago festival tonight, has been dropped from today’s festival lineup.

In a tweet, Lollapalooza representatives said, “Lollapalooza was founded on diversity, inclusivity, respect, and love. With that in mind, DaBaby will no longer be performing at Grant Park tonight.”

DaBaby will be replaced by Young Thug as a headliner tonight and rapper G Herbo was also added into the lineup. Twitter users praised Lollapalooza for taking action.

“Thank you for doing the right thing,” one user tweeted. “It shouldn’t have taken until today.”

One user even sent a message to the Twitter account for Austin City Limits, asking festival organizers there to take similar action.

Da Baby has been receiving backlash since his homophobic rant and comments about HIV on-stage last weekend went viral. He was then further criticized for releasing a music video and song referencing AIDS amid the fallout from his Rolling Loud set. On Thursday, he was also dropped from the lineup for the upcoming Parklife Festival in Manchester, England.