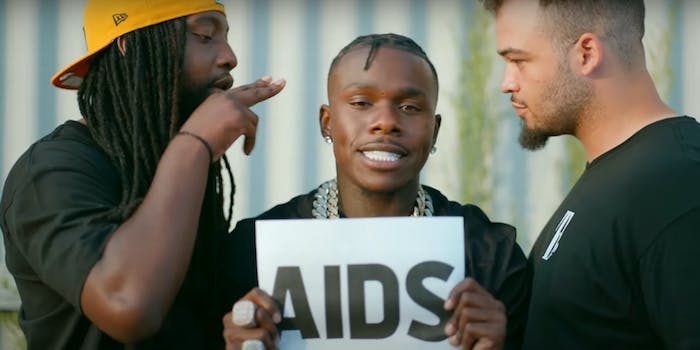 'My apologies for being me the same way you want the freedom to be you.'

After facing criticism for homophobic comments during his set at Rolling Loud in Miami last weekend, rapper DaBaby released a new video that is only adding to the backlash.

The video for “Giving What It’s Supposed to Give” opens on a funeral scene but quickly devolves into violent and misogynistic imagery. At one point, DaBaby holds up a sign that says “AIDS” as he raps “Bitch we like AIDS/I’m on your ass/We on your ass/Bitch we won’t go away.” He then shoots the two men on either side of him.

At the end, a message appears in rainbow flag colors: “Don’t fight hate with hate.” And then: “My apologies for being me the same way you want the freedom to be you.”

During his Rolling Loud set, he asked the crowd: “If you didn’t show up with HIV/AIDS, any of them deadly sexually transmitted diseases that will make you die in two, three weeks, put your cellphone lights up,” before adding other misogynistic and homophobic comments. He attempted to apologize on Tuesday.

He was called out by Dua Lipa, who collaborated with DaBaby on her song “Levitating,” and Elton John labeled his rant “misinformation” as well as homophobic in an Instagram post. Even Smash Mouth stepped in.

To critics, this video felt like another non-apology. And many questioned the title of the song, a phrase that originated in the Black queer community.

The music video was apparently filmed the day before DaBaby’s Rolling Loud performance, according to a lengthy post that featured another non-apology.