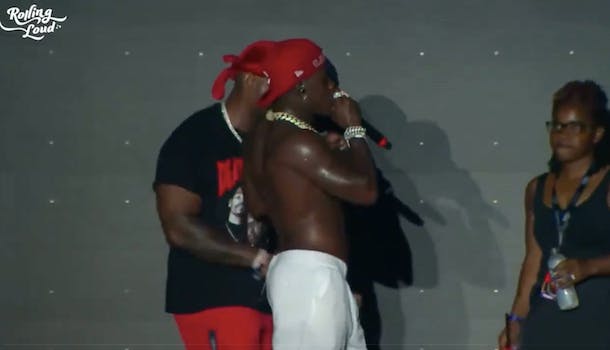 'If you didn't show up with HIV/AIDS, any of them sexually transmitted diseases, that will make you die in two, three weeks, put your cellphone lights up.'

Update 6:44pm CT Aug. 2: DaBaby posted an apology for his homophobic rant on Instagram following a week of immense backlash that resulted in several music festivals dropping him from their lineups.

Rapper DaBaby is facing immense backlash online after he went on a homophobic and misogynistic rant during his Rolling Loud set in Miami.

In what seems like an effort to hype the crowd up in between songs, the rapper starts to encourage people to put their cellphone lights up. However, his remarks, which were captured in a live stream, are homophobic and misogynistic. “If you didn’t show up with HIV/AIDS, any of them sexually transmitted diseases, that will make you die in two, three weeks, put your cellphone lights up,” he says to the crowd.

This snippet of his rant was later posted to Twitter and has since been viewed almost 744,000 times. Social media users are calling out his problematic rant, with one user calling it “disturbing.”

Author George M. Johnson quote-tweeted the video and called out DaBaby in multiple tweets. “A homophobic, misogynistic rant sprinkled with a disturbing HIV comment just so you can project some weak image of masculinity?” they wrote in one tweet.

Johnson added, “Homophobia kills. Misogyny kills. People lose their lives to this every day. This is not something anyone has time to wait on straight Black men to ‘grow’ out of. This needs to end immediately.”

In their last tweet, they said, “Furthermore Weaponizing HIV, which has killed millions of Black folks globally is harmful & dangerous HIV is STILL at epidemic levels for Black women & Black LGBTQ folks, specifically because of this type of shaming disgusting rhetoric.”

Many shared Johnson’s sentiment. Another commenter wrote, “The fact that he finally let the homophobic shoe drop…for seemingly no damn reason… like WTF.”

Another author named Renee Bracey Sherman called out the progressive Working Families Party for having DaBaby on the roster for an upcoming festival in August. “His treatment of Meg before this was awful,” she wrote in a tweet, “but how @WorkingFamilies can justify having a DaBaby at this concert to lift up Black and Brown women and queer folks after the homophobic and abusive shit he pulled just now is absurd. Misogynoir and homophobia aren’t progressive.”

The Daily Dot has reached out to DaBaby’s team.