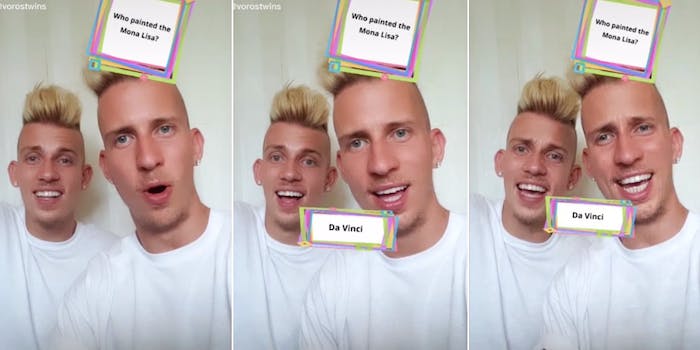 How well do you know your art history? Bet you’ve never heard of Da Vinky.

That is, you probably hadn’t heard of him until the past week, when Da Vinky memes took over Twitter. Even without context, the memes are hilarious, typically involving two random TV or movie characters looking incredulously into the distance and blurting the nonsensical name. But who is Da Vinky, and how did Da Vinky memes start?

Like most things on the internet these days, the Da Vinky meme’s origins can be traced back to TikTok. Popular TikTokers and tag-team wrestlers Chris and Patrick Voros, known as the Voros Twins, played a trivia game on the app, where they got all their answers spectacularly wrong. “Who painted the Mona Lisa?” stumped the twins, and when the answer appeared on the screen, they both said in disbelief, “Da Vinky?!”

The rest is history. The video exploded on TikTok and migrated to Twitter last week, racking up millions of views on both platforms. The Voros Twins have been living rent-free in our heads ever since, and it’s hard to log onto Twitter without seeing the words “Da Vinky” plastered across the screen. Some have styled it “Da Vinki” with an “i,” but many memes use the “y.”

Netflix Philippines even got in on the fun.

Here are some more Da Vinky memes to get you through the day.