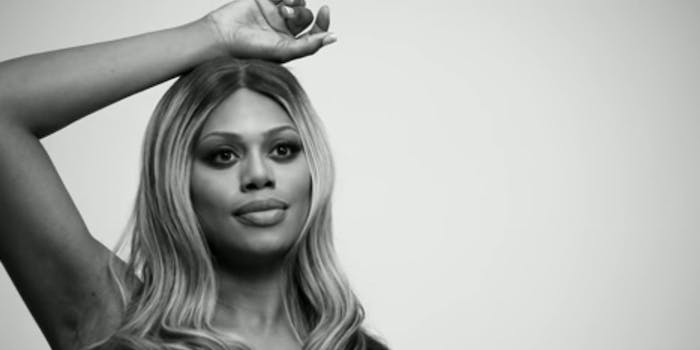 Trans women are, by far, the highest at-risk group for discrimination, murder, and suicide. One Time cover doesn't change that.

Laverne Cox is getting her own Time cover. She’s the first transgender person in history to do so.

That’s not quite the victory it might first appear.

Cox’s inexplicable snub from the 2014 Time 100 list set the stage for the media narrative of her vindication after the fact, garnering her a groundswell of public outrage over her omission, an appearance at the Time 100 Gala anyway, and ultimately a place on the magazine’s June cover, for an article entitled “The Transgender Tipping Point.”

Ironically, the Time debacle just underscores the double-edged sword that is Cox’s media ascent. The Orange Is the New Black actress, along with transgender author Janet Mock, seems to have become the new visible face of transgender activism within the last year. But one celebrity transgender actress does not an equality movement make.

Time‘s refusal to place her on the list of the most influential people of the year says far, far more about the real state of transgender erasure and invisbility in the U.S. cultural landscape than does its attempts to reap the rewards of its own snub of her by placing her on the cover months later. Giving her the cover for the upcoming issue allows Time to hail Cox as an icon within her own community, while conveniently failing to acknowledge the place she, Mock, and other transgender women hold within the larger sphere of cultural influence—something her inclusion on the Time 100 would have and should have done.

The difference between the two may seem like splitting hairs, but it’s really not. Transgender individuals, and particularly trans women, are impacted to an extreme degree by the way they interact with the society outside of their community. To quote Cox herself:

The reality of trans people’s lives is that so often we are targets of violence. We experience discrimination disproportionately to the rest of the community. Our unemployment rate is twice the national average; if you are a trans person of color, that rate is four times the national average. The homicide rate is highest among trans women. If we focus on transition, we don’t actually get to talk about those things.

Cox isn’t exaggerating.  The rate of suicide among transgender individuals is anywhere from 40 percent to 50 percent, over 25 times the national average. Nine out of 10 transgender teens report being bullied because of their gender expression. Only eight states explicitly protect people based on gender identity or expression. Violence against transgender men, women, teens and children is so constant that the trans community has created its own tracking system in order to make violent incidents in the community more well-documented and more visible.

Hate crimes, homelessness, mistreatment from the judicial system, inability to travel safely—it’s virtually impossible to overstate the difficulty the trans community faces, both in attaining reasonable standards of safety as they go through life, and in garnering respect from outside the community. Time‘s cover article appears to be trying to shine a spotlight on the trans community, which is potentially a huge step forward for transgender acceptance within wider society. But it’s important to remember that Time‘s erasure of Cox to begin with is also part of the problem.

It’s also important to emphasize that Cox and Mock are not “the face” of the transgender community. Not all trans women are extremely femme, not all trans women are fully transitioned, and not all trans women have the experience of realizing and accepting their identity from a very early age. It’s important to make sure that Cox and Mock are not the only trans women who are positively represented in the media—not when the trans community is still fighting for basic representation in media to begin with. The media is still misgendering Chelsea Manning. The media is still overlooking actual trans actors in order to laud cisgendered men who can’t even say the word “transgender” when they accept their Oscar for playing a transgendered female character.

The kind of narrative the media seems to want to uphold is that of glamorous trans women, and, alarmingly, dead or dying trans women and men. (Remember Hilary Swank’s Oscar win for playing the doomed Brandon Teena in Boys Don’t Cry?)  That these are the most common depictions of trans individuals in the media while the rest of the trans community is generally ignored and under-reported on is not only hypocritical, it’s dangerous. Time‘s snub, after all, came just months after Grantland reporter Caleb Hunnan made the decision to reveal the background of a transgender article subject, over her objections—after which she committed suicide. That piece, and the initial hoopla that surrounded it, reads like a textbook circlejerk of insulated sports journalists who are bogglingly unable to comprehend the spectacle of a secretive trans woman trying desperately to hide her prior identity.

In its apology, ESPN acknowledged that no one on its staff is trans. Moreover, no one on its staff had thought to run the article by a trans person at any stage, either for their thoughts on the high risks of outing a trans woman against her will, or the merit of exploiting her death after the fact in an article that attempted to paint her desire for privacy as duplicity and her trans identity as a kind of catfishing. The invisibility of trans women outside of their own community is lethal.

It’s completely possible that Time‘s historic cover will set the stage for a new wave of transgender representation. But it’s worth pointing out that Time also bizarrely called Cox an “unlikely icon” even after placing her on the cover. Unlikely? Really? An intelligent, gorgeous woman starring in one of the most critically acclaimed shows of 2013?

This is only “unlikely” in the eyes of media that refuses to render trans women a visible part of the world we live in, unless they’re buoyed by waves of public outrage—or unless they’re already dead.