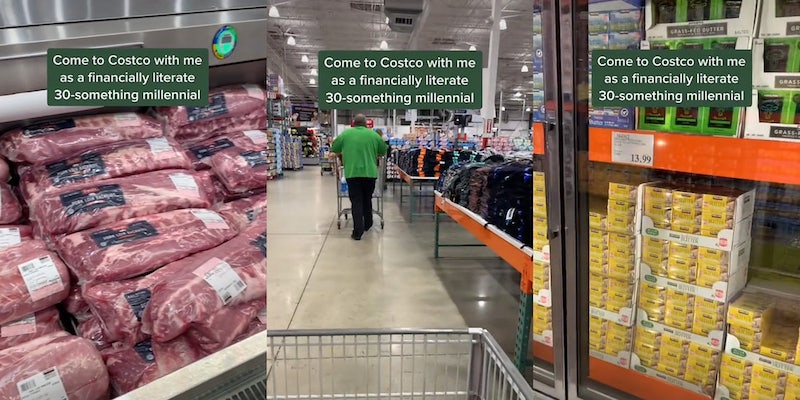 The TikTok account Honest Personal Finance is pretty self-explanatory, offering advice on all things financial. However this week one particular TikTok is really grabbed people’s attention, showing a deceptively simple walk-through of the TikToker going grocery shopping at Costco.

Captioned “Come to Costco with me as a financially literate 30-something millennial,” this TikTok has been viewed more than 1.2 million times, sharing tips on how to get through the store without wasting money on a bunch of stuff you don’t actually need.

Step one: Look down at the floor, and don’t get distracted by all the shiny electronics when you first walk into the store.

@honestpersonalfinance’s Costco haul comes to a very resectable $60.69, including meat, dairy, and non-perishable goods like paper towels. (Apparently he gets his fruit and veg from Aldi.) His money-saving strategy is all about not getting distracted from your shopping goals, because big box stores are designed to trick you into buying stuff you don’t want or need.

As this TikTok began to go viral, it inspired two types of response: People who were impressed by @honestpersonalfinance’s self-control (“I spend like 300 going in just for paper towels and tp,” quipped one commenter), and people criticizing his remark about organic meat being “a marketing ploy.”

While shopping in the meat section of Costco, @honestpersonalfinance says, “I’m gonna avoid anything that has ‘organic’ on it because that’s just a marketing ploy trying to get you more money.” This inspired a lot of pushback from commenters, many of whom argued that non-organic meat was unhealthy or low-quality, and that this wasn’t a smart way to cut corners.

“Not saying you don’t already, but keep in mind also that investing into your health is VERY important. The cheapest food items aren’t always the best,” reads one response. “Organic = non gmo + little to no pesticides used,” reads another.

So on the topic of millennial shopping habits, it seems like we have a pretty clear consensus here. Yes, it’s definitely tricky to shop at big box stores without getting distracted by fun consumer goods. But no, organic meat is not just a “marketing ploy.”

The Daily Dot has reached out to Honest Personal Finance for comment via email.

Update Aug. 9, 3:57pm CT: The creator responded to the Daily Dot in a statement: “People are so accustomed to over-spending at retail stores that they are amazed to see someone spend less than $100. That’s why I think the video has gone viral.

The entire retail experience is a mind game by businesses trying to make customers feel good about spending more money. All product labeling, placement, etc. are designed specifically to play games with your mind. Organic/grass fed/non-GMO labeling with special colors and fonts is a part of this trickery.

I don’t claim to be an expert in organic food, but everything I understand about the retail business tells me to not trust any of it. The less you buy into any corporation’s mind games, the more money you’re going to have. That’s the message I hope TikTok is seeing from my videos: be skeptical of everything you see from a business. All they want is your money. You work hard for your money, don’t let any business take it away from you easily.”